It is closing time at the Krusty Krab, and Squidward answers a last-minute phone call from a customer. Just as he is about to tell the customer the restaurant is closed, Mr. Krabs suddenly appears and snatches the phone from Squidward's hands. The customer tells Mr. Krabs that they want to order a pizza and have it delivered, an order Mr. Krabs happily accepts knowing he could get extra money. Squidward protests this by saying the restaurant does not serve pizza nor do they deliver, but Mr. Krabs spontaneously makes a pizza out of Krabby Patties and forces Squidward and SpongeBob to deliver it.

After SpongeBob does a few "safety checks" on the pizza delivery boat, Squidward tells him to drive. However, SpongeBob cannot drive since he still in boating school, but Squidward insists and advises SpongeBob to do what he does in school. As expected, SpongeBob panics when he tries to shift the boat into reverse and ends up "backing up" for miles and miles until the boat runs out of gas in the middle of a big desert. Squidward complains about the situation and kicks the boat out of frustration after SpongeBob mentions the pizza is getting cold. This causes the boat to suddenly drive off back to the Krusty Krab, leaving the two stranded and forced to continue their delivery on foot.

Throughout the journey, the duo encounters numerous mishaps: first, SpongeBob tries a pioneer trick he claims to have seen in a movie where he listens to the ground and hears a truck coming. When SpongeBob tries to get the driver's attention by doing a ridiculous dance in the middle of the road, the driver speeds up and Squidward pushes SpongeBob out of the way so he does not get mowed down. Later, the duo is caught in a violent wind storm that eventually turns into a tornado, and Squidward tells SpongeBob to let the pizza go (obviously believing it to be the cause of their turmoil), which he callously refused, as it causes them to get sucked into the tornado. However, the pizza actually saves their lives after SpongeBob turns it into a parachute.

Upon landing on solid ground, Squidward freaks out, as the road they were following is nowhere in sight. SpongeBob notices some moss on a rock and says that they should go in the direction at which the moss is pointing (another one of SpongeBob's pioneer tricks), but Squidward does not trust SpongeBob and goes in the other direction, despite there actually being civilization where the moss was pointing towards.

After an excessive amount of walking, the two gradually become tired and hungry, so SpongeBob insists that they eat coral like the pioneers. Squidward immediately spits out the coral, disgusted by the taste, and demands that SpongeBob hand over the pizza so he can eat it, as he has finally given up hope of getting back to civilization. SpongeBob refuses and a short chase ensues between the two. Just as Squidward is about to grab the pizza, SpongeBob notices a giant rock that he claims the pioneers drove for miles. Squidward is incredulous at this claim and tries to tell SpongeBob to forget about the pioneers, saying that there are none left because of their unusual traveling methods. However, he quickly changes his mind after SpongeBob runs him over with the rock and he chases after him for a ride. With the giant rock, they drive it all the way to the customer's house.

Unfortunately, their journey does not pay off well, as the customer, Tom did not get his Diet Dr. Kelp that he claims to have ordered. A confused SpongeBob checks the order, which says that the customer did not ask for a drink (though it's somewhat implied that Mr. Krabs hung up the phone before he could finish his order). Filled with anger, Tom harshly berates SpongeBob and refuses to take the pizza or pay for it before rudely slamming the door in his face.

SpongeBob then walks back to Squidward and collapses to the ground crying (while he's absorbing his tears) Appalled and enraged at how the customer treated SpongeBob and won't pay for the pizza (making the long journey and the ridiculous obstacles the duo went through all for nothing), Squidward furiously confronts Tom and brutally slams the pizza box into his face, claiming it to be "on the house!"

Squidward goes back to SpongeBob and cheers him up by saying that the customer took the pizza and "ate the whole thing in one bite." The episode ends as Squidward asks to be taken home but SpongeBob instead causes them to drive back to the Krusty Krab, which is comically revealed to be right across the street, much to Squidward's dismay (meaning they could've avoided the whole journey).

Series creator Stephen Hillenburg's original idea for the series pitch was that the writers would write a storyboard for a possible episode and pitch it to Nickelodeon.[3] Hillenburg wanted to write an episode with SpongeBob and Squidward on a road trip, inspired by the 1989 film Powwow Highway.[3] Derek Drymon said "It's a road trip movie starring Gary Farmer, who is an innocent, kid-like character who is traveling with a curmudgeon."[3] Eventually, the idea developed while they were working on it, but Hillenburg gave up the idea for the initial pitch.[3]The idea was later scrapped into a season 12 episode, "Pineapple RV."

Instead, they used another idea for the pitch that was in the series the pilot episode "Help Wanted."[3] They resurrected the road trip idea during the first season and used a lot of the ideas for this episode.[3] 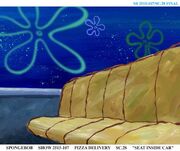 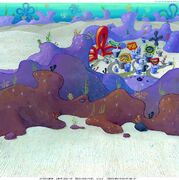 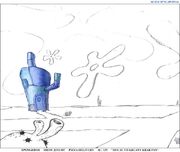 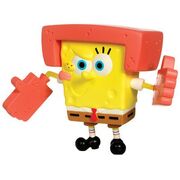 "Pizza Delivery" received very positive reviews. Nancy Basile of About.com ranked the episode number 2 on her "Best SpongeBob SquarePants Episodes" list. She said "[It] is the perfect episode to depict SpongeBob's enthusiasm for all things Krusty Krab against Squidward's apathy and cynical nature." Basile cited her favorite scene in the episode where "After the customer slams his door in SpongeBob's face, Squidward makes sure he swallows the pizza 'in one bite.'"[6]

Giving the episode 5 out of 5 stars, Bill Treadway of DVD Verdict said the episode is his "personal favorite all the episodes,"[7] writing that "this one is loaded with enough unique twists and hilarious comedy to bear repeat viewings."[7]

Emily Estep of WeGotThisCovered.com ranked the episode Number 1 on her "Top 10 Episodes of SpongeBob SquarePants" list,[8] saying "But – the pizza is for the customer, and flawless employee SpongeBob won't let Squidward eat any of it."[8] She wrote, "[The episode] has the undervalued nostalgia of being episode five of the entire series and it benefits from the aforementioned chemistry of SpongeBob and Squidward."[8] She also praised the episode as "an in-depth look at their SpongeBob and Squidward relationship, and it set the tone for just how strange the show could be."[8] Estep lauded the hitchhiking dances by SpongeBob, saying "These moves are amusing and charming, while Squidward's bitterness is easy to relate to."[8]

In 2009, "Pizza Delivery" was chosen by viewers on Nick.com as the Number 1 episode during a television marathon called "The Ultimate SpongeBob SpongeBash."[9]