"Chum Caverns"
"Pineapple Fever" is a SpongeBob SquarePants episode from season 6. In this episode, Squidward is stuck indoors with SpongeBob and Patrick during a storm.

SpongeBob and Patrick are ready to go jellyfishing when they decide to check the weather report on television. The weatherman announces that a severe storm is on the way, forcing them to stay indoors. The two start boarding up the door to protect themselves; the noise causes Squidward to hurt himself while tweezing his eyebrows. Squidward comes over to complain, but as he turns to go, the storm arrives, leaving them all stuck in the pineapple.

While inside the bedroom, Squidward grows hungry and mistakenly eats snail food. He tries to go downstairs and get some real food, only to find SpongeBob, dressed as a drill sergeant, preventing from crossing the chalk line. After trying to negotiate with SpongeBob, Squidward dashes downstairs and raids the fridge, leading to a mad, animalistic skirmish between the three. Suddenly, Squidward listens and thinks that the storm has stopped. He runs out, only to fall from a large height, as a tornado has somehow picked up SpongeBob's house.

Cleaned version of the storyboard. 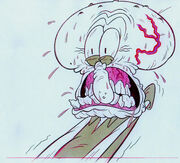 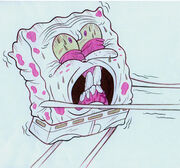