If you were looking for the article about the food, then see Pickles (food).

"Pickles" is a SpongeBob SquarePants episode from season one. In this episode, SpongeBob loses his confidence after forgetting the pickles on a Krabby Patty.

The episode starts with a normal day at the Krusty Krab, until an overweight bass named Bubble Bass comes along and makes a tricky order. SpongeBob quickly creates the patty Bubble Bass has on his mind and serves him, but Bubble Bass complains about there being no pickles on his patty, much to SpongeBob's horror.

Mr. Krabs takes it out of his pay because Bubble Bass reads the microscopic print below the menu that says "Money Back Guarantee" on it. SpongeBob loses his confidence and his mind, and cannot remember how to do anything, even to the extent that he made a Krabby Patty with inedible ingredients. Mr. Krabs tells him to go home and get some rest, but SpongeBob can't even remember how to properly get in bed. Mr. Krabs has Squidward take over the grill, which leads to disaster, with Squidward (somehow) burning and ruining all of the food and driving away customers, and burning their shakes.

Mr. Krabs worries about losing money, so he goes to SpongeBob's house, where everything is mixed up. The music and SpongeBob's speech are both mixed up too. Mr. Krabs explains to SpongeBob that if he remembers how to make a Krabby Patty, he will be back in order. It takes days, but SpongeBob eventually learns how to make a Krabby Patty properly again, albeit unintentionally due to believing he could not do it.

SpongeBob returns to the Krusty Krab, where Bubble Bass confronts him again. SpongeBob serves him his meal confidently, but Bubble Bass announces again that there are no pickles and tells SpongeBob that he has lost again. However, SpongeBob realizes Bubble Bass' trick and reveals that Bubble Bass has been hiding the pickles under his tongue the whole time to avoid paying, as well as Shubie's car keys, exposing Bubble Bass of his treachery.

Bubble Bass immediately runs away to escape punishment, and Mr. Krabs calls for three cheers for SpongeBob's return which everyone does. SpongeBob then calls for three cheers for Squidward for taking his place while he was gone. However, the crowd jeers instead of cheers because of Squidward's poor cooking, but SpongeBob assumes they are cheering. The last jeer then goes: "Boo, you stink!" before the episode ends. 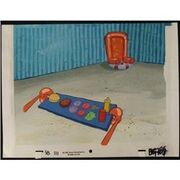 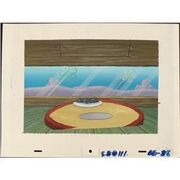 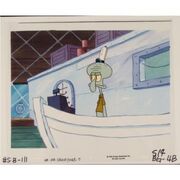 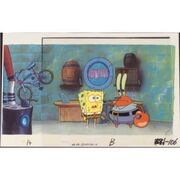 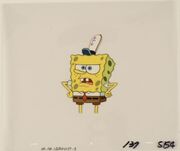 Retrieved from "https://spongebob.fandom.com/wiki/Pickles?oldid=2215383"
Community content is available under CC-BY-SA unless otherwise noted.