He is best known for being one of the main background painters in the series, throughout 182 episodes total between 1999 and 2014, as well as being the hand actor for the character Hans, (although his voice is provided by Tom Kenny.) Very little is known about him, despite being a crew member on the show since the beginning of season 1.

Along with this, he is also known for being one of the main art directors for 161 episodes between 2005 and 2021, some including "Hooky," "Wet Painters," and "Squeaky Boots," among many others. His acrylic paintings are immediately recognizable for long-time viewers of the show; they are mainly used for backgrounds, promotional materials, and especially detailed close-up shots.

He has also provided art direction for the show ChalkZone, the first two SpongeBob movies, as well as Kamp Koral: SpongeBob's Under Years.

An example of Peter's background work in the episode "Hooky."

Another background art example from the episode "Wet Painters." 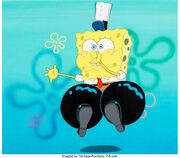 An animation cell attributed to Peter from the episode "Squeaky Boots."

An example of Peter's work.

An example of the details on closeup shots.

A comic cover Peter painted, as well as an example of a promo material.
Community content is available under CC-BY-SA unless otherwise noted.
Advertisement