Pest of the West (book)

When SpongeBuck arrives in Dead Eye Gulch, he becomes sheriff and discovers the town at the mercy of Dead Eye, a villain out to take everything the townspeople own.

Mr. Krabs hired him by pinning a gold star to SpongeBuck's shirt and called him the new sheriff. SpongeBuck said he actually was here for the fry cook job. Krabs, however, tells SpongeBuck that he gave him the badge and the law of the west says no take-backs. SpongeBuck asked about what happened to the old sheriff and Squidward told him that the old sheriff went to Boot Hill because there was no more room at Old Dead Tree Hill.

Suddenly, Pecos Patrick came in with a frightened voice, telling everyone that Dead Eye was coming. SpongeBuck did not know who Dead Eye was and everyone in the Krusty Kantina had a terrible story about him. Mrs. Puff said he made all the dancing girls cry. Pecos Patrick said the villain had once stolen his pants. Mr. Krabs said that Dead Eye has an IOU for his saloon and it was due at noon. Everyone went silent, as they heard the click-clack of tiny boots enter the Kantina. It was Dead Eye Plankton making an evil laugh and was there to take Mr. Krabs' money.

SpongeBuck then told Dead Eye that it was not his money. Dead Eye did not know who SpongeBuck was and is told that he was the new sheriff. After hearing this, Dead Eye stated he was a villain and the town was big enough for him and SpongeBuck. Unless the latter wants to settle Dead Eye with an Old West-style showdown, he should vamoose. Dead Eye would be back to take the deed to the Krusty Kantina.

The people of Dead Eye Gulch thought the situation was hopeless. There was no way a silly sponge could stop that nasty bad guy. They packed up a stagecoach and headed out of town. Mr. Krabs wanted to leave before he lost all his beautiful money. They came to a sudden stop as SpongeBuck stood in the road, blocking the way. SpongeBuck then told them that he loved the town and if they all stand up together, they can be that Dead Eye, but no one would stand with SpongeBuck... no one except Pecos Patrick.

The town clock struck noon and it was time for the showdown. Dead Eye Plankton stood at one end of the dusty street. SpongeBuck was at the other end. They slowly walked toward each other. The people of Dead Eye took cover and watched the action, fearing the worst. Dead Eye smiled cruelly. SpongeBuck was nervous. His hands were sweaty. He took another step and he stepped on Dead Eye Plankton! The villain was defeated! Everyone in town ran out from their hiding places and cheered. Mr. Krabs also wanted to stomp on him.

The townspeople went to the Krusty Kantina to celebrate. Mr. Krabs charged a dollar to squish Dead Eye and everyone lined up. Meanwhile, Pecos Patrick told SpongeBuck that he saved the town and learned about the value of idiot friendship. The two friends clinked glasses and drank their milks in a single gulp. SpongeBuck stated if he ever had a great-great-great-great-great-great-great-grandson, he hopefully will be proud of him. 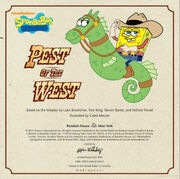 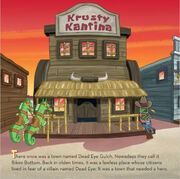 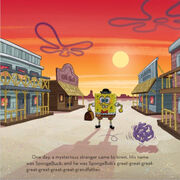