"20,000 Patties Under the Sea"
"Pest of the West" is a SpongeBob SquarePants episode from season 5. In this episode, the story of SpongeBob's western ancestor, SpongeBuck, is told.

The episode starts off at the Krusty Krab, SpongeBob discovers that Patrick has a great-great-great-uncle named Patrick Revere, who warned Bikini Bottom that man-eating mollusks are coming, but no one listened to him.

SpongeBuck got to be a Sheriff by Pappy Krabs (Mr. Krabs' ancestor) even though he just wanted to be a fry cook. But then, a villain named Dead Eye Plankton (Plankton's ancestor) arrived there and SpongeBuck had to face him at high noon.

SpongeBuck got kicked away into a desert, and Pecos Patrick Star (Patrick's ancestor) met him. SpongeBuck got a nickname for him, and it was Idiot Friend. Pecos Patrick told him to defeat Dead Eye Plankton by smacking him several times. When they get back to town (via a giant cactus that made SpongeBuck and Pecos Patrick jump so high that they landed in Dead Eye Gulch), SpongeBuck met Dead Eye Plankton, and the two walked towards each other as though it was a Western duel. However, the fight ended very quickly, as SpongeBuck stepped on Dead Eye Plankton. Something that has apparently never been done or thought of before in Dead Eye Gulch. Pappy Krabs also tried stomping on him, and he decided to set up a business where the townsfolk could squish Dead Eye. Polene Puff (Mrs. Puff's ancestor) was first in line to crush him. All the residents of Bikini Gulch give three yee-haws for SpongeBuck and built a golden statue of him in his honor (Squidward's ancestor liked his design better, which was him as a muscular man), and Pappy Krabs, Hopalong Squidward (Squidward's ancestor), Pecos Patrick, and Polene Puff holding SpongeBuck in a picture.

SpongeBob is amazed by his ancestor's actions, but wonders whatever happened to his statue, as it seemed way better than the current one. SpongeBob soon realizes that the statue is really covered in jellyfish feces, hence the statue's different look. He cleans it up by scrubbing himself all across it, which disgusts Sandy, who wonders about SpongeBob's intelligence before he shows her the statue of his ancestor and she realizes his reasons. SpongeBob then sees the golden statue of his ancestor, SpongeBuck under the jellyfish poop, while apologizing to it for not recognizing it due to its earlier condition. After that, SpongeBob and Sandy walk away, while SpongeBob is saying that maybe someday, people will know the name SpongeBob SquarePants.

Then, in the epilogue, SpongeBuck and Pecos Patrick sing a song called "Idiot Friends" to end the episode.

There was a marathon of episodes before the premiere of "Pest of the West" that people voted upon online. 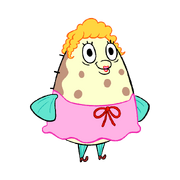 Pest of the West (animatic)