"Nautical Novice"
"Penny Foolish" is a SpongeBob SquarePants episode from season 6. In this episode, Mr. Krabs becomes obsessed over a penny SpongeBob found.

While at a discount grocery store one day, Mr. Krabs finishes up purchasing multiple items in the beginning of the episode. On his way out of the store, he spots SpongeBob picking something up. Mr. Krabs realizes and assumes he picked up a penny off the ground. Mr. Krabs starts to remember SpongeBob picking up the penny until the store clerk tells him he is holding up the line.

On his way home, he starts complaining about how SpongeBob got a free penny, while other people have to work for one. So, he decides to calm himself down, but every time he sees anything circular, he keeps having visions of pennies and becomes obsessed with getting SpongeBob's penny. The next day at work, he asks SpongeBob if he found anything special, and if he can share it with him, only for SpongeBob to reply that he found a brand new day, not a penny. Once SpongeBob goes into the kitchen, Mr. Krabs asks if he can ever borrow the penny. SpongeBob says that he does not have one. Mr. Krabs then makes SpongeBob check all of his pockets, and shakes him upside down but instead gets SpongeBob's brain out, causing his brain to crawl away. As a result, Mr. Krabs and SpongeBob both chase his brain until SpongeBob can capture it.

Later that night, Mr. Krabs spies on SpongeBob as he leaves his house. He breaks into SpongeBob's house with a metal detector to find the penny. SpongeBob comes in and notices Mr. Krabs. Mr. Krabs then explains how he wanted the penny SpongeBob found on the ground and says he is sorry. SpongeBob shows him that it was not a penny, but a dried up piece of gum, for his gum collection. Mr. Krabs is surprised that there was no penny, though is seemingly relieved and leaves.

SpongeBob soon discovers that it was a five hundred dollar bill, which he leaves on the floor and heads to bed. Meanwhile, as the episode concludes, Mr. Krabs is revealed to not believe the penny was fake and is now digging for the penny, all around SpongeBob's house. 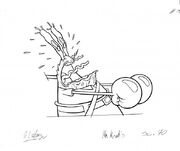