"Bubble Bass's Tab"
"Patrick's Tantrum" is a SpongeBob SquarePants episode from season 12. In this episode, Patrick goes into a destructive fit whenever he hears a bell, so his friends help him in their own ways.

The episode begins at the Krusty Krab with SpongeBob serving a Krabby Patty, thinking a customer has ordered one, by hearing a ringing sound. He checks the bell near him, the telephone, the fireplace, and inside him, only to still hear ringing. As he is about to run out of the Krusty Krab, Mr. Krabs catches him and tells him that the ringing he was hearing was coming from a small bell that he uses to bring in customers.

Mr. Krabs uses the bell on several customers, including Incidental 6, in which he then drools on the table in wanting another Krabby Patty. When SpongeBob asks to ring the bell, Mr. Krabs offers him to ring the big bell from the roof. The bell's ring results in people all over Bikini Bottom drooling for Krabby Patties and heading towards the Krusty Krab.

As the customers are enjoying their Krabby Patties, Patrick suddenly bursts into the restaurant and throws a tantrum on the floors, causing the customers to leave. SpongeBob calms Patrick down by rubbing jelly on him. When asked what he recently remembers, Patrick gives a flashback to an experience he had as a kid, in which his parents ring a bell to get Patrick to take a bath. In the flashback, he cries out of not wanting one. After the flashback ends, SpongeBob proclaims that he will silence every bell in town, as he smashes through the Krusty Krab roof.

Mr. Krabs decides to use Patrick's tantrums to his advantage by encouraging him to participate in a fighting match against Harry the Health Hazard for $1 million. While Mr. Krabs and Patrick watch on at the stadium, SpongeBob deactivates more ringing bells across Bikini Bottom. Back at the stadium, Mr. Krabs puts Patrick in the arena for the match. A bell rings to signal the start of the match, which results in Patrick going crazy. While in his rampage, Patrick, unintentionally, actually fights Harry and ends up hurting him. After Harry is defeated, Mr. Krabs uses jelly to calm Patrick down. Just when the fight is declared over, another bell rings, which results in Patrick throwing Mr. Krabs out of the stadium with another tantrum.

Back at the Krusty Krab, SpongeBob is seen wearily walking into the restaurant, with Patrick having won a trophy for winning the fight. Meanwhile, Mr. Krabs is about to put the money he won into the cash register, but a ring goes off when he presses the button, which results in Patrick going crazy again. He ends up destroying the restaurant and rips up Mr. Krabs' money. Patrick's parents come in and praise him for the result of the fight. SpongeBob tells them about how ringing a bell has affected Patrick, but they say they have never used a bell, and actually have squeezed a rubber duck to get him to take his bath. Patrick squeezing the duck causes him to have a tantrum again, as the episode ends. 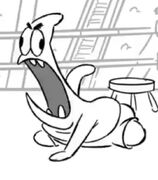