View source
If you were looking for the article about the game, then see Pool Party Pooper.

"Chocolate with Nuts"
"Party Pooper Pants" is a SpongeBob SquarePants episode from Season 3. In this episode, SpongeBob throws a party, but his guests refuse to follow his rather strict schedule.

As the special starts, Patchy organizes a house party, and all the guests come, except for SpongeBob himself. The scene cuts to SpongeBob trying to read Patchy's invitation, but he can't understand it because the lettering has been smeared by the water. SpongeBob comments that the sender must not have understood the limitations of life underwater, then throws the invitation in the fire. Back on land, Patchy introduces us to his special guests, including a live-action King Neptune, Minnie Mermaid, and Long-Beard the Pirate.

In Bikini Bottom, while shopping at the Barg'N-Mart, SpongeBob finds a "Plan Your Own Party Kit," and decides to throw a party using the kit. Despite the kit advising to invite "only your closest friends," SpongeBob invites nearly everyone in Bikini Bottom. SpongeBob wants the party to go exactly according to plan, so he decides to make sure things go in order. He makes a brutally specific schedule for different activities and cards for people to use for conversations.

In the second live-action segment, Patchy decides to have a dance lesson and promotes his dance instruction videos. Before Patchy can teach his friends how to dance, a band that Potty has hired for the party arrives. Patchy asks Potty who it is. It is Potty's favorite band, "The Bird Brains." Everybody loves the Bird Brains' music, but Patchy hates it because it is too loud and it blasts him out of his house. Patchy then tells them it's time for them to literally walk the plank. Unfortunately, he forgets that they're birds and can easily fly off.

Back in Bikini Bottom, later that night, all the guests arrive at different times. SpongeBob hands them all the topic cards, which causes an awkward environment. After the last guest arrives, SpongeBob goes into the closet.

After a while, SpongeBob sees everybody having fun and starts to panic, as they are violating his completely unnecessary schedule. He stops all the fun and music, and brings them all to the couch to do one of the scheduled events; reading aloud from the funnies. Unfortunately, he finds out the paper he's reading is yesterday's paper and leaves to get today's paper.

While going out to get today's paper, SpongeBob accidentally locks himself out of his house (though it's likely the guests locked him out for ruining their fun), allowing the guests to have fun again. He misinterprets this and believes everything is falling apart.

After continually trying to get into his house using different methods and failing quite horribly, SpongeBob, at wit's end, grabs a pickaxe and attempts to break in while dressed as a bunny.

The police find him and place him under arrest, but when SpongeBob explains everything, they don't arrest him. However, the police end up making him miss the entire party by arresting him on purpose for not inviting them.

He returns home the next morning depressed. He noticed there was a key underneath the doormat the entire time. SpongeBob then enters his house, finding that it's a complete mess. He believes his party failed, until Patrick comes over and tells him that it was the greatest party all of them had ever been to, and that he should do exactly the same thing next weekend. SpongeBob finally realizes that he doesn't need a schedule to run a party and parties are supposed to be fun. He smiles gladly and becomes proud that his party was a success after all. He finds Gary wearing a lampshade and is happy that he had fun too. The episode ends as SpongeBob turns off Gary's lamp and wishing his snail a good night's sleep.

In the final live-action segment, Patchy attempts to remedy the music situation by performing his own song with a one-man-band. Potty reminds him that it is time for Patchy's flute solo. Patchy starts playing, but soon realizes that he plays a fife, not a flute, and that the "flute" is actually a stick of dynamite. It explodes, leaving only his head intact. The Bird Brains then have the opportunity to play music, singing their new song, "Underwater Sun." After they finish, Patchy returns to end the special, with a barrel for a new body being kissed by girl parrots. Potty then says "goodbye" to the audience, ending the special. 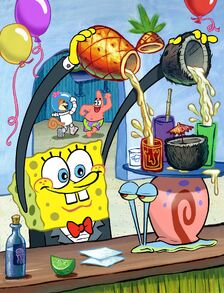