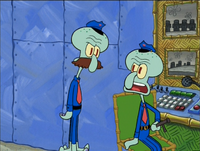 Orville is a security guard and police officer who works for the town of Tentacle Acres. He appears in the episode "Squidville." He also appears in the PC version of the video game Lights, Camera, Pants!

Like the other inhabitants of Squidville, Orville is turquoise, has yellow eyes with rectangular red pupils and has six tentacles. Because of this, he is nearly identical to Squidward Tentacles, except that he has a brown mustache, a navy blue police uniform, a red necktie, and a police hat.

He was asked if he had his nightstick ready by his colleague. He and his colleague were both knocked out by the smell of Patrick's fried oyster skins breath when the smell went through the speaker.

He is a guard at Tentacle Acres and SpongeBob called him from Boating School to get him out of the entryway. He told him someone was playing "progressive rock." He later appears in the Mermaid Man and Barnacle Boy episode.

Add a photo to this gallery
Retrieved from "https://spongebob.fandom.com/wiki/Orville?oldid=2494747"
Community content is available under CC-BY-SA unless otherwise noted.