View source
If you were looking for the article about the holiday, then see Opposite Day (holiday).

"Culture Shock"
"Opposite Day" is a SpongeBob SquarePants episode from season 1. In this episode, Squidward tells SpongeBob and Patrick that it is Opposite Day, and everything goes fine until the duo decides to take the holiday to the next level.

A now-goofy Squidward tells SpongeBob that it is Opposite Day the next morning, and that everyone must act opposite to how they usually act. A now-grumpy SpongeBob believes him, and informs Patrick, who stops breathing, until SpongeBob exclaims, "not that opposite!" A montage of the two doing "opposite" things, such as talking backwards and acting as Gary's pets, is then shown. Squidward's plot soon begins to backfire on him. SpongeBob "fixes" (damages) his house, and a shocked Squidward cleans the debris with a bulldozer. SpongeBob concludes that Squidward is acting like him, and he must therefore act like Squidward.

While Squidward is still fixing SpongeBob's house, the real estate agent arrives, and SpongeBob and Patrick both pretend to be like Squidward, giving her a tour of the house, while describing it negatively and doing the opposite of what she asks. When Squidward realizes what is going on, he rushes to his house and attempts to explain the situation to the realtor, who, upon hearing that he is "Squidward" as well, finally realizes throughout everything and berates them of intentionally messing with her for it.

Gary comes in with a pickle on his face, resembling Squidward's large nose. He meows with a Squidward-style voice, which is the last straw for her that she angrily storms out and officially declined Squidward's house of being sold. Squidward begs the realtor to sell his house, but she refuses stating she wouldn't sell the house if he was the "last Squidward to exist on Earth" and then she storms off. 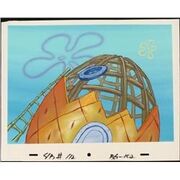 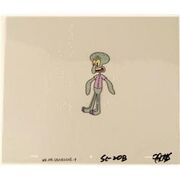 Squidward in his PJ's. 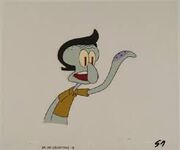 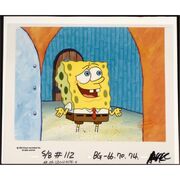 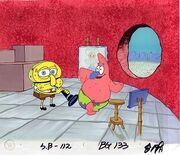