watch 01:57
SpongeBob Recap: Old Man Patrick
Do you like this video?
Play Sound

"Fun-Sized Friends"
"Old Man Patrick" is a SpongeBob SquarePants episode from Season 11. In this episode, Patrick thinks he is an old man, so it is up to SpongeBob to remind him how much fun being a child can be.

The episode begins with both SpongeBob and Patrick in a public pool playing Marco Polo. SpongeBob says Marco and opens up a Bikini Bottomite, only to discover a kid who states he is Joshua. Then Patrick is seen with a group of old people, and the lifeguard says all Shady Shoals residents out of the pool. Clarabelle mistakes Patrick for her friend Mortimer and they both go out of the pool. Patrick realizes he is all wrinkled from the pool, and Clarabelle says everyone has them, and she calls them "Oldie Foldies." She then walks off mentioning prune ice cream, and Patrick runs after her chanting "ice cream" into a bus.

SpongeBob, not knowing Patrick has left, continues to shout "Marco," until a fish, who happens to be named Marco, runs into SpongeBob, which causes he and SpongeBob to get into a fight, because Marco is upset people shout his name without wanting him.

The bus arrives at Shady Shoals and Patrick lifts all the Oldies out of the bus and into the building. Then Patrick devours all of the prune ice cream, has a brain freeze, and dies. A nurse rushes in and electrocutes Patrick with a defibrillator and his brain flies out. She then zaps his brain, and it catches fire. The nurse backs off and the smoke from the brain enters Patrick's nose. He then wakes up, squirts ketchup onto his brain, and then eats it.

Then, there is a montage showing Patrick gradually getting more wrinkly and doing old people things, until he becomes a full blown old man.

SpongeBob is in an alley, still shouting Marco, until Marco hops down from his apartment and threatens SpongeBob if he shouts his name again. SpongeBob then goes into a trance in order to become calm and tells the story of Marco's birth, until Marco starts screaming his name when SpongeBob says his parents are naming him, to which SpongeBob replies, "polo." Marco grabs SpongeBob and says he will beat up the next person who says his name wrongly, and throws him all the way to Shady Shoals, where Old Man Patrick is napping outside.

First, they try to climb a tree, and fail. Then they dance, and fail. Finally, all the oldies start chanting Bunny Buns, so they all go into the restaurant. All the oldies act amiss until SpongeBob soon also becomes so over worked that he becomes all wrinkly and old. He tries to walk and then declares he is "losing steam," falls on the ground, and steam shoots out of his holes. This steam gets Patrick moist and takes out his dry wrinkles.

Clarabelle and the oldies are playing Marco Polo, and Clarabelle says Marco, and Marco drops down from a tree, stating he is going to beat up Clarabelle. Clarabelle then flexes her biceps and punches Marco into the distance, and when he hits the ground he explodes, as the episode ends. 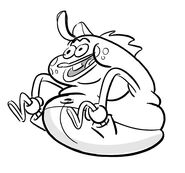 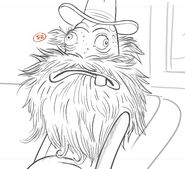 Retrieved from "https://spongebob.fandom.com/wiki/Old_Man_Patrick?oldid=3510198"
Community content is available under CC-BY-SA unless otherwise noted.