Nosferatu (real name Count Orlok) is a character who appears in the episodes "Graveyard Shift," "The Night Patty," and "A Place for Pets." He also appears in the Nintendo DS version of the video game SpongeBob's Truth or Square, as well as a recurring character in the spin-off series Kamp Koral. Nosferatu is a vampire from the titular 1922 film, and is an employee of the Krusty Krab who works as the night shift manager.

He is a vampire who wears black attire. In "The Night Patty," he is shown wearing a darker-colored version of the Krusty Krab employee hat.

Nosferatu is responsible for the light flickering at the Krusty Krab, which confuses and scares SpongeBob and Squidward, as the lights flickering is one of the signs of the hash-slinging slasher's arrival.

Nosferatu hides in the cooler during the night shift and is the boss there. He approves SpongeBob to be a fry cook for the night shift by drinking his blood using a straw.

"A Place for Pets"

Nosferatu briefly appears during the song "Pets Are People Too" when he is gifted a sea bat.

In Kamp Koral: SpongeBob's Under Years, he is known as Kidferatu. Unlike his previous appearances where he is depicted via live-action, he is fully animated. 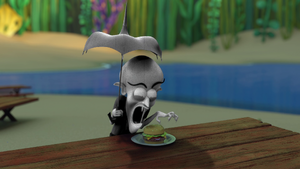 Kidferatu is one of the main campers in the mysterious cabin.

Kidferatu is briefly seen with an umbrella eating a Patty.

He appears in the "Buns-a-Blazin'" mini-game in the Nintendo DS version.