Norblock Five is an alien who appears in Patchy's segment in the episode "Atlantis SquarePantis."

Norblock Five is a short alien. He has pink lips and slimy purple skin with orange spots. He has three eyes on eyestalks, each with four eyelashes. In promotional artwork, he has arms and three eyelashes on each eye instead of four. However, his arms could be retractable.

He plays with a machine called a "Shrinkatron" and shrinks Encino in the process. When Patchy finds out, Norblock Five's parents bring Encino back to its normal size. Later, Norblock Five uses the Shrinkatron to make Potty giant. 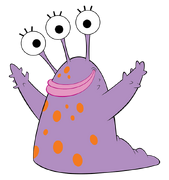 Add a photo to this gallery
Retrieved from "https://spongebob.fandom.com/wiki/Norblock_Five?oldid=2007860"
Community content is available under CC-BY-SA unless otherwise noted.