It is a burger that contains noodles in between two sesame-seed buns.

SpongeBob makes a Noodle Patty during his time as a fry cook at Wet Noodle. Noodleman does not like the food and fires SpongeBob as a result.

Later in the episode, Noodleman is among the restaurant owners who fight for getting SpongeBob back to their restaurants, because his customers apparently loved the Noodle Patties. 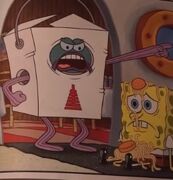