watch 01:30
SpongeBob SquarePants Recap: No Weenies Allowed
Do you like this video?
Play Sound

"Squilliam Returns"
"No Weenies Allowed" is a SpongeBob SquarePants episode from Season 3. In this episode, SpongeBob tries to get into The Salty Spitoon.

The Narrator introduces  Goo Lagoon, where SpongeBob and Sandy are about to go swimming in the lake but Sandy points out that SpongeBob is not wearing his swimsuit, so SpongeBob goes into the clothing tent to change. While SpongeBob is in the changing room, he secretly puts on his karate gear, wanting to surprise Sandy. However, when he comes out of the changing room and abruptly attacks Sandy, the latter slashes him, showing she had the same idea. During the battle Sandy hits SpongeBob so hard he goes flying out of the water. Sandy uses this time to get ice cream. When SpongeBob flies back into the water, Sandy pauses her ice cream moment to hit SpongeBob and he goes flying. SpongeBob flies so far he ends up at a place with a group of strong men waiting in line for something.

The bouncer, Reg, allows Sandy in, as she's one of the toughest fighters in Bikini Bottom, but rejects SpongeBob because he is too weak. Reg suggests that SpongeBob should instead go to Weenie Hut Jr. and then Super Weenie Hut Juniors, much to SpongeBob's intense annoyance and humiliation. SpongeBob tries other methods, like telling him a story about how he stubbed his toe while watering his spice garden and only crying for 20 minutes, wearing a wig to disguise himself, and posing as a tattoo on a man's arm. A sponge called "Drifter" is also shown and mistaken for SpongeBob, but the real SpongeBob shows up with a clown wig and Reg lets the Drifter in.

SpongeBob runs inside the club,

but he slips on an ice cube and falls, putting him in the hospital. He initially is admitted to the Bikini Bottom Hospital, but while talking to the doctor, he refers to his injuries as "boo-boos." The doctor suggests that SpongeBob is admitted to Weenie Hut General instead right next to the hospital, much to SpongeBob's dismay. 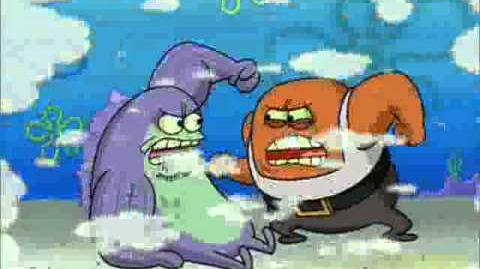 Retrieved from "https://spongebob.fandom.com/wiki/No_Weenies_Allowed?oldid=2581150"
Community content is available under CC-BY-SA unless otherwise noted.