"Stuck on the Roof"

"The Legend of Boo-Kini Bottom"

"Stuck on the Roof"
"No Pictures Please" is a SpongeBob SquarePants episode from season 11. In this episode, Patrick leads an enthusiastic stranger on a tour of his favorite places in Bikini Bottom.

The episode begins with Patrick asking for balloons at the Bikini Bottom Bus Depot, despite them not having any. Just then, a bus touring Bikini Bottom arrives to the Bus Depot so everyone can go to the bathroom. Patrick sees that the bus driver left his hat while going to the bathroom, and wears it. One of the fish checking out Bikini Bottom, Rube, thinks Patrick is the tour guide, so he starts showing Rube Bikini Bottom.

Patrick first shows him a kissing stone, then a hole he dug, a kid who he steals ice cream from, and a man who made a rude comment of him. Eventually, Patrick shows Rube his friend, SpongeBob, while he is sleeping. Next, he shows Squidward while he is showering, but they end up getting kicked out due to Squidward wanting privacy.

Patrick shows Rube the Krusty Krab and how SpongeBob cooks Krabby Patties, but when they play with the toilets, they get kicked out. Patrick then shows Sandy's treedome, but quickly get out of there due to their lack of water helmets, and also accidentally flood the treedome.

Patrick shows Rube the last stop at the tour, which is the cemetery. They meet a skeleton who is a friend of Patrick's, but Rube accidentally tears the skeleton's arm off, making him mad. The skeleton chases Patrick and Rube until they reach the former's house. SpongeBob came to warn Patrick and Rube about the angry mob, but all the police and citizens have already arrive at the scene. Then Rube turns out to be just an illusion created by The Tidal Zone. This event freaks out the citizens of Bikini Bottom, who ran off in fear as the episode ends. 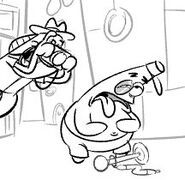