No Hat for Pat

"Toy Store of Doom"
"No Hat for Pat" is a SpongeBob SquarePants episode from Season 6. In this episode, Patrick wants to wear the Krusty Krab hat.

One day, Patrick is sleeping right outside of SpongeBob's house. He wakes up to go jellyfishing, only to discover that SpongeBob is wearing his Krusty Krab hat. Patrick knows that means SpongeBob has to work. He then discovers that Squidward had a hat too. In displeasure, he promises that he was going to get a job, and a hat, so he goes off.

At the Krusty Krab, Mr. Krabs is watching for customers. He spots a group of tourists that he wants to serve some Krabby Patties, but Mr. Krabs cannot catch them, so Mr. Krabs thinks of ideas to catch them next time they come around. He then bumps into Patrick, who he hires to stand outside and lure in tourists. He is also promised to have a hat afterwards.

SpongeBob and Mr. Krabs watch as Patrick directs customers the wrong way, and sometimes pays no attention, Mr. Krabs goes out to show him the proper way to lure in customers, but he fails too, but in the end, he receives his hat, only to fall for unknown reasons. SpongeBob asks him what is wrong. Patrick supposes that he is nervous, he falls. Patrick's falling lures in customers, including the tourists. Mr. Krabs decides to make Patrick the main attraction at the Krusty Krab. Mr. Krabs hosts a show with Patrick as the star, but the customers soon run off by Squidward, trying to entertain them, of course while thinking that they are uncultured, as he plays the clarinet terribly and roams around the Krusty Krab, oblivious to his lack of talent so the customers got out of there. When SpongeBob tries to take Patrick away for a bloody nose, Mr. Krabs arrives to see these debacles and silences Squidward's awful playing while forcing Patrick to get back to work because he does not have a nose.

The customers continue to watch Patrick, but it gets old, but then Mr. Krabs starts to think of more painful ways to make Patrick fall, and it brings them back. SpongeBob tries to convince Patrick to stop falling for enjoyment, but Patrick begs him not to as the hat promotes him and he wants to keep doing his job, so SpongeBob agrees.

The next day, he is going to fall into a bucket of spiky sea urchins, and he takes his hat off so it will not get damaged, but he then finds himself stuck on the edge. Patrick asks Squidward to push him, as the latter is pleased at the thought of pushing one of his idiotic neighbors, but he falls instead. Patrick puts his hat back on, starting to fall right after Squidward, as Patrick explained that he only fell because the hat made him top-heavy. Squidward lands in the bucket and Patrick falls on him, unharmed. Because Patrick did not get hurt, the customers get angry and attack Mr. Krabs, stealing their money back, as well as his clothes. Mr. Krabs gets so angry, he takes the hat back from Patrick, blaming him for his failure, and tells him that he will never wear the hat again as long as he lives. A depressed Patrick then leaves the Krusty Krab and goes home.

In the epilogue, SpongeBob cheers Patrick up, and tells him he can wear his hat anytime he pleases, and so they go back to their normal lives. 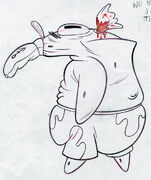