Dear Diary
Night Sweets is the second comic strip in the SpongeBob Comics No. 11.

Patrick wakes up SpongeBob at 3 in the morning. He asks SpongeBob what he is wearing and he says he got some new Feety Pajamas. He think he'll be famous wearing those pajamas. He asks Patrick what he wants to do so early and he snaps out of his thought trance. Patrick answers his question and he wants to get that chocolate they hid last night. SpongeBob questions why he wants chocolate this early and he answers him with a well known-fact that chocolate tastes better at night. He asks Patrick "But, Patrick, didn't we hide the candy in the other direction?" Star dug it up and re-hid it making it twice as safe. 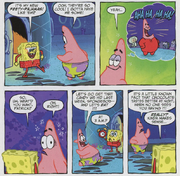 Add a photo to this gallery
Retrieved from "https://spongebob.fandom.com/wiki/Night_Sweets?oldid=2943121"
Community content is available under CC-BY-SA unless otherwise noted.