"Rise and Shine"
"Night Light" is a SpongeBob SquarePants episode from season 5. In this episode, SpongeBob reads a scary book and develops a fear of the dark.

In the beginning of the episode, SpongeBob reads a scary book before bedtime. Because of this, he sees scary creatures when he turns off the light, such as the chair being a monstrous brain beast and a coral branch tapping the window as a monster's hand. After every time he turns on and off the light, he sees or hear something scary, and has continually done so during the night.

When at the Krusty Krab, he gets terrified of a pot on his head, then tells Mr. Krabs that if he blinks, he sees something scary. He then tries not to blink, but it does not work. He then gets spooked by the dark in the freezer when Mr. Krabs wants him to get some fresh Krabby Patties. Mr. Krabs tells SpongeBob to get night lights so he will not be scared of the dark. He first buys one and however, buys more when he finds darkness in his house because he is easy to fool. Eventually, there are thousands of night lights in every room that he does not need.

Patrick wakes up and sees SpongeBob's house lit up. He thinks SpongeBob is throwing a party and goes to his house, but SpongeBob warns him about the dark, so he brings his rock inside SpongeBob's pineapple. While doing a sleepover, Squidward's eyes get burned from the night lights. Squidward goes to SpongeBob's house and tells them that they have too many lights and that the creepy creatures of the dark are just their imagination. However, SpongeBob and Patrick continue to bring more lights, bringing even a lighthouse. The lighthouse makes a giant "M" in the sky, so Mermaid Man and Barnacle Boy come. Meanwhile, the Moth, one of Mermaid Man's enemies who he has been searching 57 years for, finds the light, but SpongeBob traps him inside the lighthouse. The Moth then carries the lighthouse along with the pineapple.

In the end, SpongeBob and Patrick are alone in the dark until the sun rises. Patrick goes up to get it, thinking it is a light and SpongeBob falls asleep. Patrick comes down again on fire, shouting "Too much light!"

The episode was confirmed in TVShowsOnDVD.com on December 24, 2006.[3] 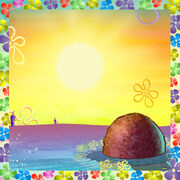