Encyclopedia SpongeBobia
Register
Don't have an account?
Sign In
Advertisement
in: Articles in need of cleanup, Video games, Sections in need of expansion,
and 4 more
English

Nintendo DS
Wii
PlayStation 2
Game Boy Advance
Nicktoons: Attack of the Toybots (also known as SpongeBob and Friends: Attack of the Toybots in Europe) is the 2007 sequel to the 2005 Nicktoons crossover game Nicktoons Unite! and the 2006 game Nicktoons: Battle for Volcano Island. It is also the prequel to the game SpongeBob SquarePants featuring Nicktoons: Globs of Doom, which was released in 2008. It was released on the Wii, Nintendo DS, PlayStation 2, and Game Boy Advance.

There are eight playable characters on all platforms from Nickelodeon television series, including SpongeBob SquarePants, Danny Phantom, The Fairly OddParents, The Adventures of Jimmy Neutron, Boy Genius, and Tak and the Power of Juju.

The opening intro for the game features Professor Calamitous on a game show called the Biggest Genius. Calamitous states that by feeding fairies Krabby Patties, they can emit a magical gas that, combined with Ghost energy, can be used as a form of fuel for his army of "Toybots."

As the opening credits are shown, the game itself opens with Patrick Star and SpongeBob SquarePants delivering a truckload of several million Krabby Patties to a Krabby Patty processing and Toybots factory. Upon arriving at the factory, a robot sucks up all the Krabby Patties, and Patrick, unintentionally, in the process. Determined to save his best friend and the Krabby Patties, SpongeBob disguises himself as a FactoryBot and manage to infiltrate the factory.

After finding his way through the factory, SpongeBob finds Patrick vacuum-packed like a toy in the factory warehouse. After freeing him, they meet Tak , of the Pupununu People, who was hiding there after being abducted and scanned by the Toybots. The trio then make their way through the main EvilToyCo factory where they discover Timmy Turner and Jimmy Neutron imprisoned in Irken-themed rooms, both also claim to have been abducted and scanned. After going through the first zone of the factory, they meet the Chad-Bot, a robot who reveals himself to be Professor Calamitous's helper, but is in reality, unhappy with him. The heroes ask if he could contact Danny Phantom to which Chad-Bot accept only if they find action figures called "Master Models" for his collection.

After collecting a few Master Models in the second zone of the factory, Jimmy contacts Danny Phantom, who says that Calamitous' invading toy army took over his house to use the energy coming from the Ghost Zone and its surrounding by big tin robots that looks like him and Sam. Jimmy tells Danny and Sam to meet him and the other heroes at the Amity Park EvilToyCo outlet. When they get there, they discover that Jimmy made Mech-Suits in order to fight the big tin Robots. After stopping the Toybots invasion on Amity Park and defeating a Giant Evil Toy Jimmy Head, they head back in Chad-Bot's basement.

There, Chad-Bot tells them that they must stop the Saucer-Men toys to capture any more heroes, the group travel through the factory's third zone and collect others Master Models along the way. After destroying the Saucer-Men toys, the heroes head to Fairy World and discover a device called the "Fairly Harvester" which is used to lure and capture fairies. The group follows the machine's pipes where they find and freed Jorgen Von Strangle, the latter thanks the heroes and destroys the Fairly Harvester.

After cutting Calamitous from its supply of Ghost Energy and Fairies, The heroes head to the last zone of the factory where they fight their way through the Professor's lair using their Mech-Suits, The heroes arrive on the Biggest Genius set and find out that the winner of the Biggest Genius is none other than Chad-Bot himself, who tells Calamitous' plan to abduct the best characters from every universe lead to his victory. Chad-Bot thanks the heroes for helping him and the game ends with Chad-Bot cutting Calamitous' mustache off with an electric shaver.

This version opens with Professor Calamitous talking about his plan to take over the world with toybots and how he kidnapped SpongeBob, Timmy, Jimmy, Danny, and Tak.

The gameplay includes playing as two Nicktoons in some levels and plotting an operational Mech suit in others. Players journey through Bikini Bottom, Amity Park, Fairy World and Calamitous' Lair, as well as the Toybot Factory, which is divided into multiple segments.

The Nintendo DS version is a more simplified 2D platformer that relies heavily on the touch screen where characters are commanded to move by swiping them on the direction the player wants them to go while also interacting with the environment. Players journey through Bikini Bottom, Amity Park, Fairy World, Pupununu Village, Retroville and Evil Toy Company.

The Game Boy Advance version of the game is a 2D side-scroller platformer.

Main article: List of early versions of video games#Nicktoons: Attack of the Toybots

They are three unused SpongeBob, Danny Phantom, and Timmy Turners bonus levels in the game alongside their respective tracks. A few Master Models went unused in the console version, most of them are characters from KaBlam! and Action League Now!.

Two concept art showcase a scrapped character called "Rusty Beard" and his ship that would've been used to navigate through Nickelodeon universes. It's possible that they may come from an earlier version of the game storyline. Other concept art also show a few scrapped ideas such as different designs for the Mech-Suits or SpongeBob, Patrick and Danny Phantom standing in front of the entrance of the EvilToyCo factory, something that never happen in-game. 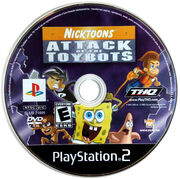 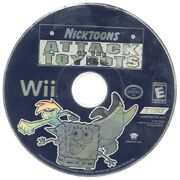 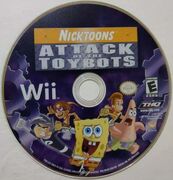 A later version of the Wii disc (USA). 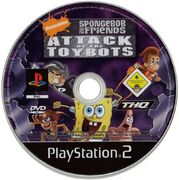