"A Chuckie Finster Christmas, Channukah, Kwaanza, Winter Solstice"
"Nickelodeon Blimp" is a SpongeBob SquarePants Kids' Choice Awards short. In this short, SpongeBob walks down the street, but an orange blimp suddenly falls from the sky. SpongeBob asks Gary what it is and then gets excited.

Firstly, SpongeBob is walking down the street when an orange blimp falls from the sky and hits him in the head. SpongeBob then asks Gary what it is and then starts dancing around after figuring it out, until suddenly stopping and asking Gary what a blimp is. Then the short ends. 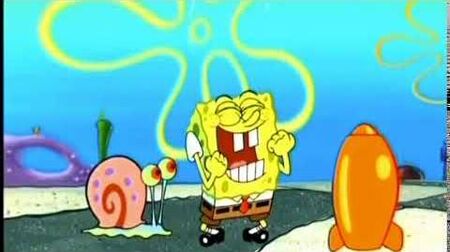 Retrieved from "https://spongebob.fandom.com/wiki/Nickelodeon_Blimp?oldid=3446932"
Community content is available under CC-BY-SA unless otherwise noted.