Start a Wiki
If you were looking for the article about the studio, then see Nickelodeon Animation Studio.

Nickelodeon, often shortened to Nick and previously known as Pinwheel from 1977 until 1979, is an American children's cable television channel. The company's headquarters is located in New York City, New York and its animation studio is located in Burbank, California.

In this channel, the series SpongeBob SquarePants is transmitted in the countries.

Nicktoons, known as Nicktoons Network from 2005-2009, is a channel that airs reruns of Nick's older animated lineup. SpongeBob SquarePants reruns are seen on here, despite the number of times it appears on the main channel. It mostly airs non-HD episodes and sometimes it has newer episodes along with the older ones.

TeenNick, known as The N from 2002-2009, is a channel that airs reruns of Nick's older live-action comedy lineup. A throwback programming block, named NickRewind, airs on this channel from 10:00p to 6:00a due to its content appealing towards teens and young adults. Sometimes, TeenNick would air reruns of SpongeBob SquarePants and other currently airing Nick shows like The Loud House.

Nick Jr., known as Noggin from 1999-2009, is a channel that airs reruns of Nick's older children's programming lineup. There are no commercials, except for promotions of which shows come up next. The mascots of Noggin were Moose and Zee, a talking bird with his non-talking bird friend. They were featured from 2003-2012, even after the rebranding. The mascots were suddenly dropped from the main channel in 2012, but they found new life on the Noggin/Nick Jr. app, which was released to the App Store and Google Play in 2015.

Despite this channel available on many cable providers, ViacomCBS continues to host a short children's programming block on Nickelodeon since 1988.

Nick@Nite is an adult-oriented nighttime block on Nickelodeon that was established in 1985. It airs reruns of classic sitcoms from the 1980s-present as well as the occasional airing of Nickelodeon and Paramount movies. It is often a competitor to Cartoon Network's Adult Swim, another adult-oriented block at night affiliated with a major children's cable network. SpongeBob SquarePants reruns air on Nick@Nite from 8:00p to 10:00p, and from 6:00a to 7:00a.

Nick.com is Nickelodeon's official website. For most of its history, the site featured fan forums, over a thousand online games, episode clips, and original videos. Nick.com was once critically praised, receiving the Better Business Bureau's first-ever Internet privacy seal of approval in 1999, and winning a Webby Award in 2003.

As of December 2018, Nick.com no longer makes SpongeBob online games anymore and removed the games off of the website.

Main article: Nickelodeon Magazine
A series of magazines published by Nickelodeon, launched in 1995. They used to release SpongeBob Comics.

The first Nickelodeon logo was taken from "Harriet the Spy (1996)" with a blue rhino.

Taking from "The Wild Thornberrys Movie (2002)"

Taking from "The SpongeBob SquarePants Movie (2004)"

Taking from "The SpongeBob Movie: Sponge Out of Water (2015)"

Taking from " The SpongeBob Movie: Sponge on the Run" (2021).
Add a photo to this gallery

This is a gallery of general Nick logos. 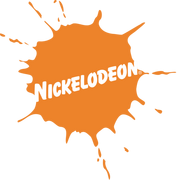 This was a special bug only used for SpongeBob's Nicktoon Summer Splash in 2001, portrayed in the shape of a jellyfish to symbol said host show.

The Nickelodeon jellyfish logo that appears in SuperSponge, along with the SpongeBob SquarePants series logo from 1999-2008.

Early Nicktoons logo that was used in episodes produced from 1999-2006.

Nickelodeon logo that was used in episodes produced in 2007, only 2007 in some episodes.

Nickelodeon logo that was used in episodes produced from 2007-2008. Some episodes may have the previous or subsequent logo instead.

Nickelodeon light bulb logo in standard-definition that was used in episodes produced from 2008-2010.

Nickelodeon light bulb logo in high-definition that was used exclusively in the episode "Truth or Square."

2009-2017 Nickelodeon Productions logo in standard-definition that was used in episodes produced from 2010-2012.

2017-present Nickelodeon logo that has been used in episodes produced since 2017.

The Nickelodeon "Haystack" logo that was used in many 1990's Nickelodeon shows and the SpongeBob DVDs until 2008.


Start a Discussion Discussions about Nickelodeon