October 18, 2005
Nick Picks Volume 2 is a Nicktoon crossover DVD release that features one episode each from seasons 2 and 3 of SpongeBob SquarePants, along with select episodes of All Grown Up, The Fairly OddParents, The Adventures of Jimmy Neutron: Boy Genius, Danny Phantom, My Life as a Teenage Robot, and Rugrats. 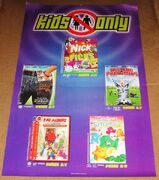