View source
If you were looking for the article about the book, then see New Student Starfish (book).

"Clams"
"New Student Starfish" is a SpongeBob SquarePants episode from season 3. In this episode, Patrick joins SpongeBob's Boating School, but he gets him in trouble.

As the episode begins with SpongeBob getting ready to go to school in the morning, he heads out the door, only to see Patrick. Patrick eagerly asks him if he can go jellyfishing. SpongeBob says he has to go to school, and he asks Patrick what he usually does when he is gone. Patrick says that he waits for SpongeBob to get back, and SpongeBob feels sorry for Patrick. SpongeBob then tells Patrick that he can come to school with him.

They arrive at 6:20 AM, and class starts at 9:00 AM, which SpongeBob considers "Late for being early." He then shows Patrick around the school and explains their classroom's "Good Noodle Board" system, where "good noodle stars" are placed on a Good Noodle Board next to the chalkboard. SpongeBob has by far the most stars of anyone in the class, having 74 in total, and adds Patrick's name to the chart so he can start collecting his stars. He also shows to him Roger, an unborn animal egg in a case with only a light-bulb for warmth.

When class starts, Mrs. Puff sees Patrick and asks him his name. He gets nervous and replies with "twenty-four," and the whole class laughs at his response. At their desks, SpongeBob and Patrick laugh among each other about what comes after number "twenty-four," and Mrs. Puff lets Patrick off and warns SpongeBob to pay attention. Later, Patrick draws an ugly picture of Mrs. Puff, calling her a "Big Fat Meanie," and throws it over to SpongeBob's desk. When SpongeBob looks at Patrick's drawing, he gets upset with Patrick and tells him that he cannot do that because Mrs. Puff is the teacher.

Mrs. Puff thinks the picture was made by SpongeBob, and she takes out a small plastic scraper to remove one of his stars from the good noodle board as a punishment, much to SpongeBob's horror. Mrs. Puff then tells SpongeBob to move to the available desk in the back of the room. Soon after, Patrick tries to tell SpongeBob something, and SpongeBob, becoming very irritated, tries to ignore him. Patrick begins spitting spitballs at SpongeBob to get his attention and says that he has "something important" to tell him. SpongeBob finally asks him what he has to say, and Patrick simply says "Hi." SpongeBob is furious and screams in frustration. Mrs. Puff angrily tells him that perhaps this would be a good time for recess.

During recess, SpongeBob confronts Patrick in the hallway, and they start fighting (which is fake), so they are both given detention. During detention, the two say how much they hate each other, and SpongeBob says he would hate Patrick even if the light bulb keeping Roger alive went out. Suddenly, the light bulb goes out, and Roger starts to freeze. Frightened on the inside, SpongeBob and Patrick try to ignore both situations but end up tearfully apologizing, and then they work together to save Roger. SpongeBob keeps the egg warm, while Patrick gets a new light bulb. They both successfully save Roger from his death in the end.

Suddenly, Mrs. Puff appears, who had been watching the whole incident through her one-way chalkboard. She decides to give them each one a golden star for saving Roger. Patrick then realizes that this was a boating school and not "Spanish class." He leaves, saying goodbye to SpongeBob and Mrs. Puff. After Patrick leaves, Roger suddenly hatches from the egg, revealing him to be a live-action chick who asks what he had missed. Then the episode ends. 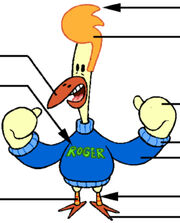