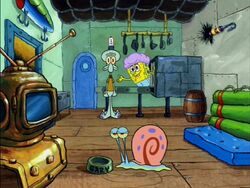 Originally, there was going to be a scene where Gary either was shown being milked or the aftermath of being milked for the snail milk featured in this episode.[1] This was most likely was removed as it would have been disturbing and Gary is a male snail, so it would not make sense.