"Hooky"
"Neptune's Spatula" is a SpongeBob SquarePants episode from season 1. In this episode, King Neptune discovers someone has finally pulled the golden spatula from the grease, but does not believe it is SpongeBob.

The opening of the episode shows SpongeBob and Patrick visiting the Fry Cook Museum, where they see a greasy griddle with a golden spatula embedded in the grease. On it is a plaque, which reads "Many have tried to pull this spatula out of this ancient grease, but all have failed." Larry the Lobster then attempts to pull it out but fails. SpongeBob then reads "Only a fry cook who's worthy of King Neptune himself can wield the golden spatula." SpongeBob, while posing for a photo, accidentally and effortlessly pulls it out while pointing out the menu section to a woman, who in response to the dark clouds appearing in the museum says, "Holy smokes!" in a man's voice. It turns out she meant it in a literal sense because then King Neptune appears in a gust of smoke.

Neptune asks who pulled out the spatula, and everyone says it was SpongeBob. King Neptune refuses to believe this because he doesn't look like the fry cook he was thinking of and asks for proof. Patrick shows him the photograph he took, but Neptune still refuses to consider such a lowly being as SpongeBob worthy to hold the golden spatula. He challenges SpongeBob to a patty-making competition, The Ultimate Cookoff. If SpongeBob wins, he will stay at Atlantis forever and become a god. If he loses, he has to give up fry cooking forever. Patrick continually jeers to Neptune about SpongeBob's skills and says that he could complete up to 500 challenges. He is repeatedly zapped by Neptune three times until all that is left of him is a burnt mark on the floor. SpongeBob asks Neptune to restore Patrick, and he does so (only with Patrick's face now on his rear end).

In the Poseidome, King Neptune makes 1,000 Krabby Patties, in the time it takes SpongeBob to make just one, winning the challenge. However, when Neptune shares his patties with the audience, they think that they taste awful. Neptune is angered by this and asks why they would think that SpongeBob's would be any better. He tastes SpongeBob's Krabby Patty and finds it to be delicious. Neptune regurgitates the patty and eats it again, saying "I think I'd like to try it a second time," disgusting the audience in the process.

As the episode draws to a close, SpongeBob is declared the winner, but when he finds out that his friends cannot come with him to Atlantis, he tearfully refuses to go to Atlantis, and instead arranges for King Neptune to be a trainee under SpongeBob at the Krusty Krab, teaching him that "perfect Patties are made with love, not magic." 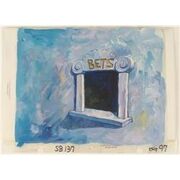 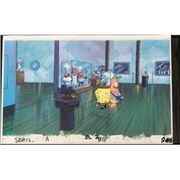 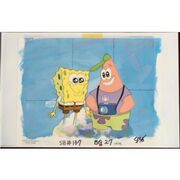 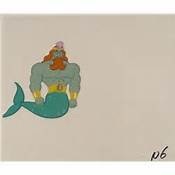 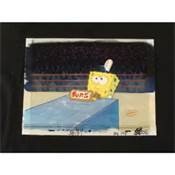 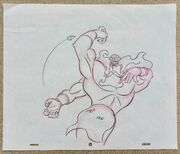 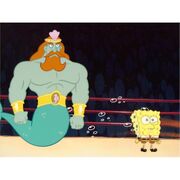 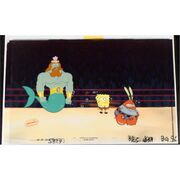 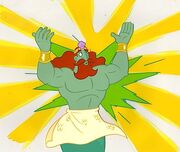 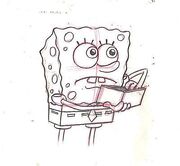 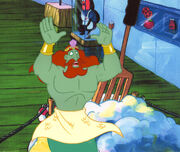 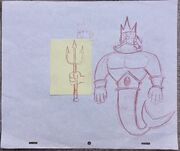 According to Jay Lender's Twitter account, there was a scene for King Neptune flexing his moustache, and Patrick and Gary being as the audience for SpongeBob during Mr. Krabs' announcement were cut because of time constraints.[2]