View source
If you were looking for the article about the book, then see Naughty Nautical Neighbors (book).

"Boating School"
"Naughty Nautical Neighbors" is a SpongeBob SquarePants episode from season 1. In this episode, Squidward destroys SpongeBob and Patrick's friendship and gets more than he bargained for.

On a seemingly normal day, Squidward has made a delicious soufflé, but SpongeBob and Patrick's constant laughing distracts him from enjoying it. Squidward sees that they are having a private conversation with bubbles. They whisper a message into the bubble wand instead of blowing into it, and when the bubble pops, the message can be heard.

Annoyed by this, Squidward makes bubbles of his own using the liquid from his soufflé and proceeds to insult the two while imitating their voices to ruin their friendship. Thinking the bubbles are from each other, SpongeBob and Patrick become angry and get into a fight, eventually declaring that they are no longer friends before storming back to their houses (unbeknownst to them that Squidward is the one who caused this).

Squidward comes outside and eats his soufflé while laughing after Patrick squashed himself with his own house, but in doing so, he chokes on the fork he was using and faints. Patrick witnesses this and saves his life by performing CPR on him (which is basically blowing him up and as the air comes out, the fork can be seen spluttering in between his lips).

Squidward thanks him and he becomes Patrick's new friend, inviting him into his house to watch him practice his clarinet composition called "Solitude in E Minor." Despite Patrick claiming to love music, he immediately falls asleep as soon as Squidward plays a single note. Meanwhile, a lonely SpongeBob tries to cheer himself up by drawing faces on three of his fingers and pretending they are his "friends," but this only results in him bursting into tears.

Back outside, Squidward drags the still asleep Patrick out of his house, and in the process, he throws his back out. SpongeBob sees this as an opportunity to help him and, despite protests from Squidward, he dives into the latter's back and cracks it back into place. Squidward screams but immediately feels better. But he makes the mistake of referring to SpongeBob as his "friend" while thanking him, thus making SpongeBob believe that Squidward is his new best friend.

They both walk into Squidward's house, where SpongeBob plays a song (badly) for Squidward on his double bass (which he thinks is a bassinet) and when Patrick, now half-asleep, appears in the window and interrupts the song, SpongeBob destroys the instrument in a fit of rage. Squidward explodes in anger and kicks him out as a result, and decides to take a relaxing bubble bath, but is horrified to find Patrick, who is now fully awake, lounging in the tub. Squidward furiously orders him to leave, but SpongeBob appears through the window and discovers this, causing the two to argue again. This drives Squidward crazy, and he flees his house, hiding in a trash can outside. Seeing the huge mess he created, Squidward realizes he needs a plan to get SpongeBob and Patrick to become friends again (and thus leave him alone).

Squidward decides to invite SpongeBob and Patrick to a dinner party (without telling either of them that the other is coming) to repair their friendship. When they arrive, they are still mad at each other. Squidward tries to get them back together by offering them soda, but the situation devolves into a competition to see who can drink the most soda and thus become Squidward's friend. Eventually, Squidward runs out of soda and leaves to get some more, telling the two to stay and "chat."

While he is gone, SpongeBob and Patrick, who are both extremely fat from all the soda they drank, still refuse to talk or even look at each other. SpongeBob then hiccups a small bubble that makes a burping sound upon popping, which amuses them both and they become friends again. However, they create so many bubbles from laughing that it causes Squidward's house to explode. Upon arriving back and seeing the destruction, Squidward angrily tells the two to leave, and slams the door (which is somehow still standing) shut. A bubble pops near the door, causing it to fall over and crush Squidward, who moans "Ohhh! My back...," concluding the episode. 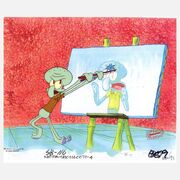 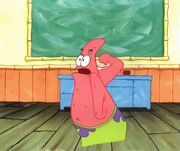 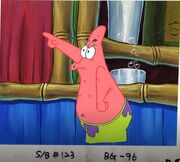 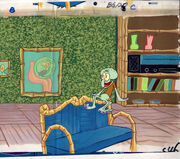 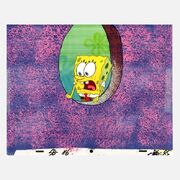 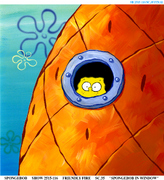