"Opposite Day"
"Nature Pants" is a SpongeBob SquarePants episode from season 1. In this episode, SpongeBob gives up a modern life to live off the land with the jellyfish.

As the episode opens after SpongeBob daydreams about becoming a jellyfish and living in the wilderness, he accidentally starts a fire and Mr. Krabs asks him why he is not concentrating. SpongeBob explains that he wishes to live in Jellyfish Fields with the jellyfish. Mr. Krabs laughs heartily and then explains to SpongeBob that he would not last even one day in the wild and that everything at his job is better than nasty old jellyfish. SpongeBob however, is still confident he can do it on his own and angrily quits his job as a fry cook. Mr. Krabs is shocked, but certain that he will return.

SpongeBob goes home and starts giving away all his material possessions to his friends. He even gives a tearful Patrick his prized jellyfish net, Ol' Reliable. Sandy comes over and asks SpongeBob if he's having a garage sale. SpongeBob denies it and says that he is giving up all his possessions to go live with the jellyfish. Shocked to hear about this, Sandy asks SpongeBob why he would want to live among the jellyfish and explains that they are cold, mean, and not too bright. SpongeBob however, denies her response and tells everyone that maybe one day they will end up like him. After saying goodbye to all his friends, SpongeBob removes his clothes (except his shoes) and runs away naked while acting like a jellyfish, leaving Sandy and Squidward somewhat confused as to why he took off his pants. They leave after betting on his maximum time (Sandy gives him a week and Squidward gives him 11 mins) while Patrick starts to cry because he is devastated at the loss of his best friend.

Once he arrives at Jellyfish Fields, SpongeBob is glad to be "home" and he tries to fit in with the other jellyfish, but cannot get the hang of it. Meanwhile, Patrick and Sandy have a picnic to try to trick SpongeBob into coming back but he resists. Patrick desperately tries to get SpongeBob to return home, but SpongeBob still refuses since he is happy out in the wild. He leaves while Sandy tries to drag the hysterical Patrick away.

A crazed and heartbroken Patrick soon returns with Ol' Reliable, intent on making SpongeBob his trophy. Patrick shows SpongeBob the jar that he will put him in once he catches him. SpongeBob frantically tries to dissuade Patrick as his former friend chases him through Jellyfish Fields.

SpongeBob eventually jumps into a jellyfish hive out of Patrick's reach, forcing him to give up. Relieved, SpongeBob takes to eating the jelly inside the hive before the jellyfish return to it. Upon the return of the jellyfish, SpongeBob greets them in a friendly matter, but then realizes Mr. Krabs and Sandy were right about jellyfish being mean as he is repeatedly stung and chased out of the hive and into a cold wet cave by them. Disheartened, but not giving up yet, SpongeBob tries to sleep in the cave using a fern as a blanket, but the fern doesn't keep him warm enough and all of a sudden, he ultimately feels very itchy. He then removes the fern and finds poison sea urchins on him, forcing him to run out of the cave scratching himself very fast.

Finally deciding that the wild is not as good as he thought, SpongeBob gives up living in Jellyfish Fields and returns to Bikini Bottom sadly. Upon his return to the pineapple, he realizes his great mistake; he had a wonderful life with many good friends, and he gave it all up for nothing.

As SpongeBob opens the door, he is greeted with a "Welcome Home" party by his friends. All is forgiven, SpongeBob puts his clothes back on and Mr. Krabs gives him his Krusty Krab employee hat back. Everyone then piles in Squidward for a group hug. However, the poison sea urchin bacteria spreads and everyone except SpongeBob becomes itchy. Therefore, he concludes by stating "It's great to be home!". 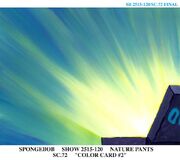 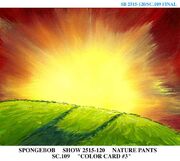 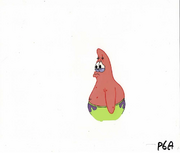