View source
If you were looking for the article about the DVD, then see The Seahorse.

"Just One Bite"
"My Pretty Seahorse" is a SpongeBob SquarePants episode from season 3. In this episode, SpongeBob adopts a feral seahorse and refuses to let her go free.

In the beginning of the episode, it is springtime in Bikini Bottom, and the three neighbors are celebrating accordingly. SpongeBob, however, is having a problem in which each flower he plants suddenly gets eaten every time he looks away, but never when he has his eyes on it. SpongeBob then discovers that the culprit is a green seahorse. The seahorse is lured towards his floral bookmark, which she eats. They become friends and begin to ride around and do things together. At the end of the day, SpongeBob decides to keep Mystery as his new pet, and lets her stay at his house.

When SpongeBob arrives at work the next morning, he leaves Mystery outside at the bike post. Scooter and Wobbles approach Mystery and mistake her for a kiddy ride. Wobbles suggest Scooter try it out, and when he inserts a coin into her "slot," Mystery kicks him into the distance and he blows upon impact. Wobbles run away screaming, causing Mr. Krabs to come out and see what the trouble is. He sees Mystery and mistakes her for a monster; SpongeBob tells him that she is his pet, but due to her injuring a prospective customer, he is ordered to get rid of her, and if he disregards his order, he will be fired for not cooperating with him.

SpongeBob attempts to hide her in a cupboard in the kitchen while Patrick finishes building a stable. SpongeBob offers Mystery a Krabby Patty, which she begins craving after eating. While he initially avoids being caught sneaking Mystery into the kitchen, SpongeBob gets in trouble when Mr. Krabs comes out of his office a second time and witnesses him curing a sick Mystery, who had developed a stomachache from consuming various objects moments prior. Mr. Krabs is upset with his employee, and he tells SpongeBob that the horse has got to go, but SpongeBob is extremely reluctant to proceed due to great sentiment.

Mr. Krabs, feeling sympathy for SpongeBob, tells him a story of his favorite dollar and how he eventually spent it for a soda on a hot day. He tells SpongeBob that Mystery needs to be freed because the indoors are not a place for a wild animal, and SpongeBob consents and takes Mystery out the front door, where he painfully asks her to leave. Mr. Krabs tries to comfort SpongeBob until Squidward shows him an empty safe. Realizing that Mystery ate the Krusty Krab's finances, SpongeBob and Mr. Krabs chase after her, disappearing into the distance. The episode ends with Patrick trying to enter a hat store, but is unable to because the wooden plank nailed to his head is too wide to fit through the door. 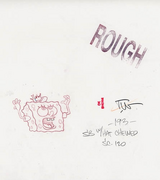