"Ink Lemonade"
"My Leg!" is a SpongeBob SquarePants episode from season 11. In this episode, once Fred's leg heals up, SpongeBob is determined to keep it out of harm's way.

The episode starts with a TV montage of Fred getting his leg hurt in many ways, including the lighthouse from Mrs. Puff's Boating School. Eventually, the doctor cuts off Fred's cast and says that if he isn't more careful with his leg, he will be forced to have it replaced with a robot's leg, causing the robot that is transplanting its leg, Tom to beg him not to take his leg.

Outside of the hospital, Fred finds SpongeBob and tells him not to get near his leg, noting a flashback that had his leg run over by a toy train. SpongeBob decides that he should protect his leg unnoticed, so he covers over harm to Fred's leg, including a wood cutter in Fred's workplace, hot coals, and even bashing other people that is near Fred. After Patrick gets a bite taken off a leg from a girl scout, Fred admits that he misses the hospital because he is in love with a nurse. SpongeBob decides to help break Fred's leg for him.

SpongeBob tries many methods to break Fred's leg, including slamming Fred's leg with a hammer, zapping it, and having the Alaskan Bull Worm eat it off to no avail. The last plan is to have Fred's leg run over by a train, however right before Fred's leg gets run over, Tom the robot comes and stops the train, continuing to clamor not to take his leg. SpongeBob takes out his leg and gives it to Tom, making him happy but sent to the hospital. SpongeBob grows back his leg, and because he says "My leg!", the ambulance comes back, but landing and running over Fred's body. Fred finds out that they hit him everywhere except the leg, finally sending Fred to the hospital.

At the hospital, Fred is happy that SpongeBob brought him back to the hospital and calls in his nurse that he’s in love with, Nurse Bazooka, about to give a gruesome sponge bath to every patient. However, Fred starts to sing a song in order to show how much he loves Nurse Bazooka. She loves the song and kisses Fred on the cheek repeatedly. The episode ends with a closing transition that snaps off Fred's leg, causing him to scream "My leg!" 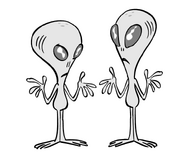 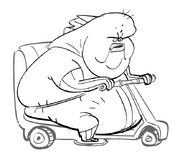