Start a Wiki
This is the page about Mustard O' Mine. If you were looking for the article about the location, then see Mustard Mine.

"Mustard O' Mine" is a SpongeBob SquarePants episode from season eleven. In this episode, when the Krusty Krab runs out of mustard, Mr. Krabs sends SpongeBob, Patrick, and Squidward to dig up some more.

The episode starts with SpongeBob spraying mustard for the customers, including spraying a mustard man for Nancy Suzy Fish. Eventually, SpongeBob runs out and attempts to get more. However, the cabinet for mustard only has Mr. Krabs, who gets upset for running out of mustard and demands SpongeBob, Squidward (and Patrick) to go to the Mustard Mines to get more mustard. However, Walter Haddock warns them that the mines is a dangerous place and states that whoever went into the mines never got out (although Walter himself is still alive).

At the mines, Squidward has SpongeBob and Patrick follow him as they sing a song while erratically bouncing around in the cave, eventually causing rocks to block the entrance. Squidward is angry with them for trapping them as they realize their fault and Patrick freaks out before he faints, but SpongeBob and Squidward awakes him up with a Krabby Patty. Squidward tends to Patrick who excitedly asks for mustard on the patty and an annoyed Squidward drops him on his head and walks on top of him because of his idiocy.

As they continue in the mines, the trio only find diamonds, gold, and soon a telephone. Mr. Krabs calls the payphone as SpongeBob answers and tells him that the customers has gone wild for the lack of mustard. Squidward then mines through a wall and finds a subway to the condiment mines.

After SpongeBob finally strikes mustard, the trio is now happy and starts to dance and sing yet another song. However, Walter comes back saying that the mustard will eventually blow upwards and then corks up the mustard and beats up Squidward as SpongeBob and Patrick foolishly believe that this was the point. Patrick then fights back Walter, and his head hurts Walter's hand and sends Patrick flying around until he lands on the cork. Patrick is stupidly disappointed in hurting Walter and thinks he lost before his landing causes the mustard to start to erupt. While Walter freaks out as he escapes but then rides on an escalator, SpongeBob tries to continue blocking the mustard from erupting. Mr. Krabs calls again, still wanting mustard as the customers are now angry.

Eventually, the mustard erupts like a geyser and fills the Krusty Krab. The episode ends with the real mummy asking for relish on his Krabby Patty. 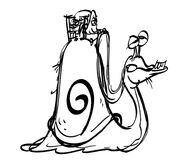 Start a Discussion Discussions about Mustard O' Mine