View source
If you were looking for the article about the location, then see Mustard Mine.

"Shopping List"
"Mustard O' Mine" is a SpongeBob SquarePants episode from season 11. In this episode, when the Krusty Krab runs out of mustard, Mr. Krabs sends SpongeBob, Patrick, and Squidward to dig up some more.

The episode starts with SpongeBob putting mustard on people's Krabby Patties, only for the mustard to run out. This leads to Mr. Krabs tasking SpongeBob, Patrick, and Squidward to go to the Mustard Mine to get more mustard. An old man named Walter Haddock comes to warn the Krusty Krew about the mines, but they proceed to go anyways.

The three find the Mustard Mine and start looking for mustard. They find an escalator that takes them down to where all the minerals are, but everything in the mines is not what they are looking for. Squidward finds a train station that will take them to the condiments section of the mines and quickly gets in there with SpongeBob and Patrick already in the train before it closes.

After leaving the train station, the three find several condiments inside the rocks before eventually finding mustard underneath the ground. While they are trying to open up the hole to get the mustard, Walter Haddock comes back to once again warn them about the mustard and how if they mine the mustard, it will explode due to the immense amount of pressure inside of it.

However, Squidward is not threatened by this, so he tries to fight with him. Patrick also fights with him, thinking the game is about not hurting the attacker. Walter Haddock punches Patrick and he lands on the mustard hole, causing the pressure to build up so much that the mustard explodes out of the mines to the Krusty Krab. This floods the restaurant with mustard, ending the episode with the customers satisfied. 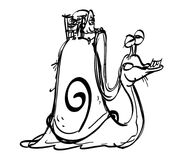 SpongeBob-"A Mining We Will Go!” Song