"Squidward the Unfriendly Ghost"
"MuscleBob BuffPants" is a SpongeBob SquarePants episode from season 1. In this episode, SpongeBob orders fake arms with inflatable muscles to impress Sandy.

SpongeBob starts his day off by posing in front of a mirror as he gets ready to make himself "large and wide." He goes to his stuffed animal barbell weights, and with great effort manages to lift them over his head, only to fall. Just then, Sandy comes inside and SpongeBob shows off his stick arm "muscles," bragging about his "state of the art weight set." However, Sandy bluntly tells him that he is not going to gain any muscle mass unless he starts using her own personal training program. SpongeBob is ecstatic, imagining himself in various situations - flipping burgers, jellyfishing, and sleeping - with a bodybuilder's physique, and agrees to come to Sandy's treedome at 5 AM to begin his new workout.

At the treedome, SpongeBob is put through a progressively intense series of warm-up exercises from push-ups to boxing to running on a giant hamster wheel, each resulting in his arms separating from his body. Sandy now takes the less than enthusiastic sponge to the "arm cruncher," to which the sight of the contraption drives SpongeBob away, only leaving a phone in Sandy's grasp. Back home, SpongeBob is despondent and in pain at how difficult working out actually is until a voice addresses him from the TV, calling him a wimp. It is a commercial for the Anchor Arms, a set of inflatable muscle balloons with options ranging from normal to "veiny," and "for the ladies... hairy!," with the shark demonstrating its uses. Gary meows skeptically, but SpongeBob is interested and goes to buy some.

Later, while wearing the Anchor Arms, SpongeBob heads towards Mussel Beach, freaking out everyone else along the way. Once he gets there, everyone is awestruck by "MuscleBob BuffPants," and follows him to the Juice Bar. Sandy comes along asking where SpongeBob is and finds him surrounded by his new fans. A short moment where SpongeBob cannot move his drink reveals the downside of his Anchor Arms: because the "muscles" are just air inside an arm-shaped balloon, he is still a weakling, but manages to avoid detection by sipping the straw from a distance. Sandy is naturally confused as to how he managed to gain muscles so quickly, to which SpongeBob replies that he found his own secret workout. Intrigued, Sandy asks what the secret was; putting SpongeBob on the spot as everyone else also wants to know.

SpongeBob manages to fool them by claiming armpit farts are his secret workout, pushing aside skepticism by pointing out the results. Everyone else promptly begins armpit farting, while Sandy congratulates SpongeBob for finally finding a workout that works for him. To SpongeBob's surprise, she then suggests he needed to put those muscles to the test, and it just so happens the Anchor Toss Competition is today. Completely caught off guard, SpongeBob doesn't notice a drink being placed on top of his Anchor Arms and tries to tell Sandy he is not interested, but she decides to go sign them up anyway. Scared of being exposed, he tries to stop her but finds himself pressured down by the drink. The panicking SpongeBob finally catches up to Sandy after the waiter takes the drink off of his hand, sending him flying into the pole next to her. Unfortunately, Sandy has already signed them up, and there's no turning back.

At the Anchor Toss, everyone is preparing themselves, except for the worried and unsure SpongeBob. He nervously says he is ready when Sandy comes by to check, but quickly begins inflating more into his Anchor Arms in desperation when she turns away. Perch Perkins announces the start of the 8th Annual Anchor Toss Competition, with Don the Whale making the first toss. His anchor lands at 200 yards, with an "instant replay" crushing the helpless measurer. Next up is Larry the Lobster; the measurer, not wanting to be crushed again, tries to run out of firing range, but the anchor tracks him and crushes him at 210 yards. Sandy is up next, and launches her anchor with her signature karate kick; the measurer desperately tries to outrun the anchor but is hit at 510 yards, putting Sandy in the lead.

It's finally SpongeBob's turn, with the crowd chanting his name as they do his armpit farting workout. SpongeBob tries to lift the anchor, but only manages to pull it on top of himself. He manages to pass it off as a joke, but knows that he can't keep the charade up; he is going to be exposed as a phony. However, he decides he has to try anyway and blows his arms up to the "jerk" size, apparently breaking them. He puts all of his might into lifting the anchor, but all it does is push the air into various parts of his body and eventually the Anchor Arms explode out of overinflation, revealing SpongeBob to be a weak fraud. Upon realizing this, the crowd exclaims that he lost and start cheering for Sandy, since she won. Sandy herself is very disappointed in SpongeBob's revelation, tapping her feet expectantly; SpongeBob gets the hint, realizing there's no substitute for hard work and trudges after her.

The episode ends back at the treedome, as SpongeBob's new exercise is changing the TV channel 100 times with his thumb, much to his discomfort. Sandy figures they have finally found an exercise that works for him right before SpongeBob's arm falls off again, and he asks if she could pick it up. 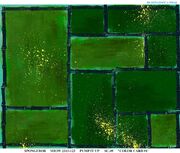 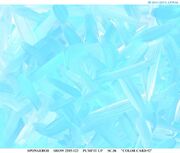 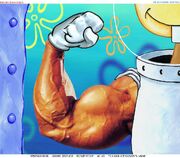 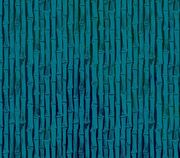 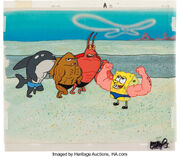 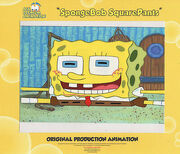 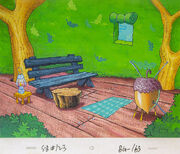 
*On The Complete 1st Season, Home Sweet Pineapple, and The First 100 Episodes DVDs, "Mavericks" is replaced with "Rocket Sled to Oahu" by The Mel-Tones while the Amazon Prime Video version has the "Mavericks" music left intact.