Mrs. Krabs[1] is an unseen character in the series. She was the mother of Pearl Krabs and the wife of Eugene H. Krabs. It is possible that she is deceased.

She is confirmed to be a whale like her daughter, as revealed the official trivia book, written by former episode writer David Fain in 2000. In the book, Mr. Krabs says that Pearl is a whale because she "takes after her mother that way."

Pearl's lack of a mother is a reference to the phrase "mother of Pearl," which Mr. Krabs often says when something surprises him. Stephen Hillenburg was against revealing the identity of Mrs. Krabs and had kept it a secret throughout the series. For this reason, Mrs. Krabs has never made a physical appearance.[2]

Briny Buddies, a section featured in various British Nickelodeon magazines, asked readers to come up with a possible design for Mrs. Krabs in 2008. The winning designs were featured in later installments. Additionally, the fact sheets from Briny Buddies for both Pearl and Mr. Krabs list Mrs. Krabs as a member of their family.

Episode 18 of the web series Bikini Bottom Mysteries features a "fake-out" reference to Mrs. Krabs. At the end of the episode, the narrator introduces another bonus mystery about the identity of someone connected to Pearl. He says that viewers have wondered about this topic since they first saw Pearl. It seems like he is about to say who Pearl's mother is; he slowly says, "Who... is... Pearl's..." but then finishes the sentence with "best friend?"

The exclamation "mother of Pearl!" is used in the following episodes, usually by Mr. Krabs:

"Married to Money" is the first time that Mrs. Krabs is directly referenced. In the episode, Mr. Krabs tells Pearl that he may have found her "a new mom." This greatly upsets Pearl, who responds "No way!" and begins to describe how terrible a stepmother would be.

According to the current show-runner Vincent Waller, Stephen Hillenburg received many letters requesting an origin story for Pearl.[3] A plot outline for a special double-length episode revealing Pearl's origin, as well as the identity of her mother, was written during season 5 and started early development stages. However, the episode was shelved for an unknown period of time due to Hillenburg's disapproval of the concept, and it will never be finished.[3]

"She's a whale y'see (takes after her mother that way)." 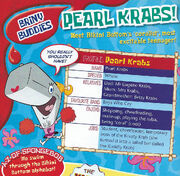 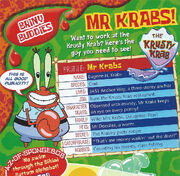 Briny Buddies design contest for Mrs. Krabs
Add a photo to this gallery

Retrieved from "https://spongebob.fandom.com/wiki/Mrs._Krabs_(Pearl%27s_mother)?oldid=3543717"
Community content is available under CC-BY-SA unless otherwise noted.