The basement is a large room. It has a washing machine and a dryer, along with a workbench[1]. In "The Slumber Party," there is a basement shown as a root beer cellar. In "Barnacle Face," the basement is a dungeon-like place where Mr. Krabs makes soap out of Krabby Patties using his soap press.

On the first floor is the living room and there are many valuable items, such as pictures, a vending machine, a doll-a-rama, and knick-knacks. By the front door is a barrel TV. The kitchen and dining room are all in one room. In the dining room, there is a table, a chair, and a window with a curtain.

Mr. Krabs' bedroom is located on the right side of the house. He sleeps in a hammock and has a bedside shelf, though he slept on a mattress in the episode "The Lost Mattress." The pillow in his hammock seems to store money.[2] A bathroom is connected from the bedroom, which includes a toilet and a sink with a mirror.

Pearl's bedroom is located on the left side of the house and contains a bed and walls filled with Boys Who Cry posters, as she is a huge fan of the band.

There is another floor in the center of the house in "Barnacle Face." On this floor, there is a master bathroom. The bathroom contains a toilet and a sink.

There is a second floor shown in where a table with two chairs and a shellphone are seen.

There is a balcony on the top of the house. 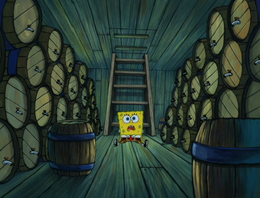 Mr. Krabs has a root beer cellar underneath his house, which appears in "The Slumber Party." In the episode, Mr. Krabs tells Pearl and her friends not to touch it, although SpongeBob empties all of his root beer. It then floods the house and ruins Mr. Krabs' house and his pile of old newspapers.

Pearl and her friends think SpongeBob is a monster after he absorbs all of the root beer in the cellar.