"High Sea Diving"
"Moving Bubble Bass" is a SpongeBob SquarePants episode from Season 11. In this episode, SpongeBob and Patrick help Bubble Bass move out of his mother's basement.

The episode begins with Bubble Bass holding his fantasy talk show, only to be interrupted by his mother, who wants him to do chores. This is the final straw for Bubble Bass, as he decides to move to his grandmother's house. However, he needs two idiots to do the job for him. Fortunately, SpongeBob and Patrick arrive at just the right time. Bubble Bass tells them if they help him move him out, he will give them free Krabby Patties, which convinces them to help out.

Bubble Bass makes the two help move out his furniture and fakes him breaking his back so he does not have to do any work. SpongeBob and Patrick end up packaging everything except for the frame of the house and carry the bag through Bikini Bottom.

SpongeBob and Patrick meet some obstacles while bringing the bags, but eventually reach Bubble Bass' grandma's house. They accidentally destroy her house due to the weight of the bag, but it turns out they were at a house similar to the house they were supposed to go to. They finally reach Bubble Bass after walking across a bridge between the two houses. However, despite Bubble Bass' promise, he eats the bags with the Krabby Patties. This makes Patrick mad and tells him that things will get crazy if he does not give SpongeBob a free lunch. The two leave, but Bubble Bass does not care as he still moved out. However, it turns out SpongeBob and Patrick had packaged his mother in the bag too, making her angry and punish Bubble Bass, as the episode ends. 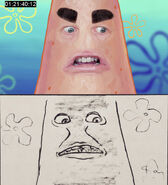