Move It or Lose It

"Hello Bikini Bottom!"
"Move It or Lose It" is a SpongeBob SquarePants episode from season 8. In this episode, Mr. Krabs and Plankton circulate petitions about the bulldozing of their respective restaurants.

The episode starts during an ordinary afternoon in Bikini Bottom. A vehicle pulls up with a vinyl that reads "City of Bikini Bottom." A fish who is apparently an employee of a company steps out of the car and places a sign with two notes on each side. Both Mr. Krabs and Plankton think this is suspicious and step out of their restaurants to this employee. After the state officer assures himself that the people standing next to him are Eugene Krabs and Sheldon Plankton, he claims the signs are for them. The sign claims that there is now a law that states that two restaurants cannot be within 100 feet of each other.

After hearing that one of their restaurants will be bulldozed if the action is not carried out, Mr. Krabs and Plankton simultaneously measure with measuring tape the distance between the restaurants. It is revealed that their restaurants are exactly 99 feet away, and they have a dispute on whose restaurant is being bulldozed. The employer assures them that they have 24 hours to make that decision. After further disputing, Plankton decides to start a petition in order to save the Chum Bucket, while Mr. Krabs does the same in order to save the Krusty Krab. Mr. Krabs hands Squidward and SpongeBob petition forms for people to sign. SpongeBob loves the idea, and even signs his name first, while Squidward disappears, leaving his petition on the floor.

SpongeBob heads to Mrs. Puff's classroom, where she is startled at the sight of him. He asks her if she would sign the petition, only for her to question why she would do such a thing. A shipping man walks into the classroom and claims that Mrs. Puff's new boat has arrived. SpongeBob asks the shipping man if he would sign the petition as well, only for him to ask the same question as Mrs. Puff. The shipping man unloads the new boat seconds after, only for SpongeBob to put the car in reverse and for it to crash into the classroom. SpongeBob spots a police officer later on the street and asks him if he would sign the petition. He firmly disagrees and hands SpongeBob a flyer stating that Krabby Patties are dangerous. SpongeBob, knowing that this is the work of Plankton, heads to the Krusty Krab, only for an angry mob disputing at Mr. Krabs. Nat Peterson questions why Krabby Patties are dangerous, only for Mr. Krabs to stutter in his reply.

SpongeBob saves him by bringing out a batch of Krabby Patties and stating they are dangerous due to them being so delicious. The mob calms down from their rage and eats the Krabby Patties. Plankton decides to accept fate and says "goodbye" to his inventions. SpongeBob arrives and cries with Plankton, for he feels that a part of this demolition of the Chum Bucket is somewhat his fault, since he makes the Krabby Patties so delicious. SpongeBob, in his weeping, gives Plankton an idea to give people money to make them sign his petition. Karen reassures him that they are 372 dollars in debt, but Plankton extends the idea. Mr. Krabs then uses his telescope to spy on the Chum Bucket, for it seems Plankton is receiving an abundance of money.

It is shown that Plankton is having a yard sale to make money, yet then he uses said money and sells it for free only if people sign the petition to save the Chum Bucket. Mr. Krabs, angered at the idea, has to accept fate and tells SpongeBob to pack up his belongings in the Krusty Krab. The state officer returns with a bulldozer to bulldoze a restaurant.

Plankton shows he has a majority of the people in Bikini Bottom on his petition, so the state officer has no choice but to bulldoze the Krusty Krab. Mr. Krabs and SpongeBob chain themselves to the restaurant, except for Squidward, who is at home enjoying a glass of lemonade. The state officer gives Mr. Krabs and SpongeBob two chances to move, yet they refuse. He then begins to move the bulldozer forward, while Plankton pulls up a seat, watching over. The state officer turns out to only push the Krusty Krab backwards and measures the distance he moved the restaurant, being exactly one more foot.

Plankton is enraged and questions why he saw no destruction. The state officer responds he only wanted to make sure the restaurant met the requirements of the new law. Plankton, in his fit of rage, becomes stuck in his foldable chair. SpongeBob is reassured that the Krusty Krab will not be shut down and then proceeds to hop into the bulldozer, hugging the state officer so much that he is unaware he set the bulldozer in reverse.

The bulldozer smashes through the Chum Bucket and Plankton is finally able to escape from the chair and sees his restaurant destroyed. He then places himself back into the foldable chair so he does not have to see the restaurant in its smashed remains, ending the episode. 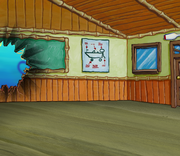