"Mr. Krabs Takes a Vacation"
"Mooncation" is a SpongeBob SquarePants episode from Season 8. In this episode, Sandy takes SpongeBob to the moon for a vacation.

In the show, SpongeBob meets Sandy, who is preparing for a trip to the moon. She asks him to help her with her luggage, but he runs off to the bakery. He tries to take a number, but gets tangled in the tickets from the dispenser, to the baker's annoyance. The baker asks for "Number 12," and SpongeBob gives him his ticket. Through gritted teeth, the irritated baker asks him what he'd like. SpongeBob says he'd like a bon voyage sheet cake with "yummy letters." He asks the baker to write, "Have fun on the moon," but thinks of what would rhyme with moon (goon, rune, noon, tune), while the baker angrily suggests loon, but he goes with "See you soon." He takes the cake to Sandy's, but her rocket just started the countdown. It lifts its ladder, but SpongeBob leaps on, and into the ship. Sandy is annoyed, and says she must adjust for the newly added weight of SpongeBob. The ship blasts off, and soon they're in space. While in there, SpongeBob presents her with the cake. She warns him that food that is not contained will fall apart in a zero-gravity environment, which the cake promptly does. She says everything will be fine unless it gets into the vent, and once again, the cake does just that. She climbs into a special suit and goes out to remove the cake from the vents. While standing out there, she takes a bit of the cake and says it could use "more nuts." She returns to the ship, and the moon is getting closer. Sandy picks a crater as a good place to land the ship.

When they exit the ship, Sandy sandboards on the moon, showing off many of her moves, such as the "Flippity-Doo Dah," the classic Texas tail grab (where Sandy grabs her tail to the shape of Texas with a star on it ), and the 7-20 nut-job (where she slices a moon rock to an acorn, and eats it), including one where she lies on Saturn's rings; the "Tour de Saturn."

When it's SpongeBob's turn to sandboard, he floats away, since he's too light in the moon's gravity. Sandy uses a lasso made with a rope and a moon rock, and tells SpongeBob to grab it. He does, and falls to the moon. While screaming and holding onto the moon rock, he shows amazing skills, which impress Sandy. SpongeBob tries again, but this time, his board crashes into the fuel tank, causing it to leak. Sandy pulls SpongeBob back to the ship, telling him they need to return home while there's still enough fuel left. They manage to make it back to Earth, but the steep dive means they'll turn into a giant fireball, which causes SpongeBob to panic. Sandy goes outside to "grab this bull by the horns" and lassos the ship, pulling it out of its dive. It flies over Bikini Bottom, doing loop-de-loops, and eventually crashing to the ground. SpongeBob sees an unconscious Sandy lying on the ground and tearfully apologizes for ruining her vacation. Sandy tells him he didn't ruin her vacation; she had a great time. She plans on taking him with her to Mars next, then jokingly suggests he bring her cakes more often, and they laugh.

A postcard for the episode 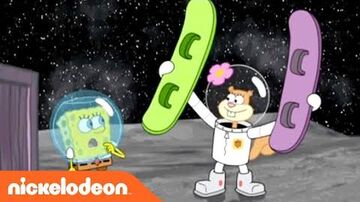