"Bikini Bottom's most popular residents are all ready for a crazy day under the sea with the Mega Bloks SpongeBob SquarePants Micro Action Figures Series III. Viking SpongeBob, Gym Squidward, and Patar Star are just some of the figures in this series, which features main SpongeBob characters as well as never-before-seen character variations! Each micro action figure comes with a cool accessory, and you never know which one you're going to get! There's even an all-new Larry the Lobster figure that could be yours! You can collect them all to build your own Bikini Bottom world!"[1] 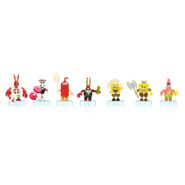 Retrieved from "https://spongebob.fandom.com/wiki/Micro_Action_Figures_Series_3_(Mega_Bloks)?oldid=1841691"
Community content is available under CC-BY-SA unless otherwise noted.