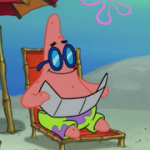 Hello, everyone! You can ask me anything you want except personal information.