"Unreal Estate"
"Mermaid Pants" is a SpongeBob SquarePants episode from season 10. In this episode, SpongeBob and Patrick have fun playing as Mermaid Man and Barnacle Boy, and Mr. Krabs and Squidward decide to play along as the bad guys.

In the beginning of the episode, SpongeBob and Patrick play Mermaid Man and Barnacle Boy, in their costumes. They drive in the invisible car, pretending it is the invisible boatmobile and think Squidward's house is an evil lair. They climb, and Squidward sees them. He then cuts their rope, and they fall to the ground. They think Squidward is Dr. Negative, while Squidward sings a song about how much he hates his neighbors.

At the Krusty Krab, SpongeBob and Patrick sing the Mermaid Man/Barnacle Boy song, annoying Squidward. He tells them the song is stupid, causing SpongeBob and Patrick to transform into their costumes and call him Dr. Negative again. Patrick thinks that a nearby fish has been injured, but he really just has toilet paper attached to his foot from the bathroom. Patrick gets out his first aid kit and they mummify the fish and put him in a wheelchair. Patrick then burns the fish's eyes with peroxide. Angered, the fish moves away. Squidward then tells them they have to take the trash out.

SpongeBob and Patrick punch the trash and it lands on the customers and they leave angered. Mr. Krabs is angry that all his customers are gone and he calls Squidward into his office. He shows his secret room, with comic books, and also with a suit that Krabs sewed up himself. Krabs then puts on the suit, called Captain Tightwad, with Squidward playing the doctor. Krabs sends out lassos to attack SpongeBob and Patrick, but all of them miss. He then throws Squidward at SpongeBob, and he gets stuck. He manages to break free, but spins out and knocks objects, including money. SpongeBob then questions their fighting and opens up his comic book, which states that no superhero should fight a bad guy until the bad guy commits a crime. Mr. Krabs then steals his own money, but SpongeBob is not stupid to realize that.

The setting then changes to a bank, where Krabs pretends to rob the bank. An old man tells him that the ATM is outside, but then attacks Squidward and Krabs after they said they were pretending to rob the bank. At night, the Krusty Krab, now called the Lair, has transformed into a scientific evil lab. SpongeBob has a crime scene set so they can play, but Squidward takes it seriously, thinking it is his chance to knock his neighbors out. He actually lowers the lever on the trap, sending SpongeBob and Patrick down towards boiling grease. Squidward wants them to fry, but Krabs gives up because Squidward is literally playing the bad guy. SpongeBob and Patrick free themselves by tipping the lift, but Squidward and Krabs get fried and The Krusty Krab is now destroyed.

In the end, Krabs sticks to reading comic books and SpongeBob and Patrick fake drive into the distance. The TV Announcer says he needs to find another job and asks if it is too late to go back to college radio. 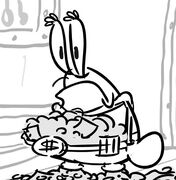