"Doing Time"
"Mermaid Man and Barnacle Boy IV" is a SpongeBob SquarePants episode from season 3. In this episode, SpongeBob plays with Mermaid Man's shrink ray on his utility belt, but doesn't know how to turn things back to normal size.

In the opening, Mermaid Man and Barnacle Boy are entering the Krusty Krab for lunch, but Squidward and Barnacle Boy have an argument. Squidward, unimpressed with the duo's heroic career, casually mocks them, causing SpongeBob to realize they are in the restaurant and go into an excited frenzy, eagerly requesting their autograph. The heroes run away from him, accidentally leaving Mermaid Man's belt inside. SpongeBob finds it and tries to give it back, but they drive away in the invisible boatmobile before he can do so.

SpongeBob decides to wear the belt and play with it, thinking that he could hold on to it until after work. He discovers the "Small Ray" and starts shrinking the items in the kitchen. At the register, Squidward is suddenly startled by the commotion in the kitchen, which causes him to mess up a customer's order by accident, resulting in a punch in the face. This prompts Squidward to enter the kitchen and ask SpongeBob where the ruckus is coming from, only to see almost everything shrunken. Squidward at that moment discovers that SpongeBob has acquired Mermaid Man's belt. Assuming that SpongeBob has stolen the belt, Squidward plans to do the right thing and call Mermaid Man in order to inform him of the situation. Worried that his reputation with the heroes will deteriorate, SpongeBob panics and shrinks Squidward with the belt after SpongeBob fearfully tells Squidward that if Mermaid Man finds out, he will be kicked out of his fan club for good. Squidward demands SpongeBob to return him to normal size, but he has no idea how. Due to the belt's complicated and excessive features, he instead accidentally puts Squidward through increasingly ridiculous and excruciating torments. Squidward suggests getting Mermaid Man's help, but SpongeBob still refuses, stating someone else must be able to help him and not wanting Mermaid Man to find out.

SpongeBob goes to Patrick for help, to no avail. Patrick mistakes Squidward for an action figure and starts playing with him, even after being told that he is the real Squidward. Patrick then suggests turning the "M" upside down, setting the belt to W for "Wumbo," a meaningless term seemingly coined by Patrick. SpongeBob questions the existence of this word, but Patrick responds by conjugating "Wumbo" and combining it with a handful of other suffixes. SpongeBob is finally convinced by this idea and decides to test it out, but then he accidentally shrinks Patrick. Squidward orders SpongeBob to take him and Patrick to Mermaid Man for help, but SpongeBob still refuses as he does not want Mermaid Man to find out, and places him and Patrick in a jar. Seconds later, citizens start coming to and greeting SpongeBob, prompting him to shrink them so that they cannot tell Mermaid Man that he has gained possession of the belt.

Eventually, SpongeBob has shrunken everyone in Bikini Bottom and crams them all into the jar. When his mother tells him he needs to admit his mistakes, he then realizes he shrunk Mermaid Man and Barnacle Boy as well, and he tearfully apologizes to them. Mermaid Man accepts his apology and trudges through his senility to remember a story about the first time he used the belt, until everyone interrupts him and demands that he tell SpongeBob how to return them to normal size. After thinking for a moment, Mermaid Man asks SpongeBob if he set the belt to "Wumbo," which makes everyone realize that Mermaid Man does not remember how to restore them to normal size either.

The citizens then form a mob and venture into SpongeBob's body, then begin assaulting his internal organs and bones. This goes on a for a while until everyone says aloud that SpongeBob is too big to be destructible, which gives him the idea to shrink Bikini Bottom before shrinking himself.

The citizens are pleased with this, as they see no discernable difference from their previous lives to living in a miniature Bikini Bottom. As the citizens celebrate, a bus pulls up and Plankton steps out, returning to Bikini Bottom from a vacation. He is surprised that the city is now smaller than him as the episode ends. 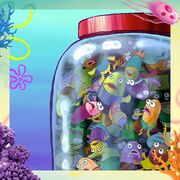 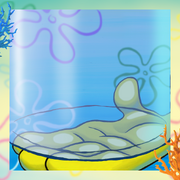 Unused painting of a close-up jar.

Art for a deleted scene.[2]