In the beginning of the episode, Mermaid Man and Barnacle Boy are going on vacation, so they invite SpongeBob and Patrick to look after the Mermalair. The two hero hopefuls long to play with the various gadgets, but are left with the express command to not touch anything.

While wandering around the Mermalair, SpongeBob and Patrick find Man Ray, one of Mermaid Man's most fearsome nemeses, encapsulated in a prison of frozen tartar sauce. SpongeBob longs to pepper the villain with questions, prompting Patrick to activate the unfreezing process. As the two argue over the ramifications, Man Ray awakens, only to find the majority of his body still frozen. SpongeBob informs him they cannot let him go due to his evil nature. Man Ray convinces them that he is actually good, and so they release him. He quickly attempts to attack them, but is stopped by the tickle belt he still wears: a device that, with the push of a button, tickles whoever is locked into it.

Man Ray sobs crocodile tears over his situation, expressing a desire for someone to teach him how to be a good person. SpongeBob and Patrick offer their services, and Man Ray accepts with the intention of jumping ship once the belt is off. Their first lesson starts with what to do if someone has dropped their wallet. Patrick drops his wallet and Man Ray tries to give it to him, but Patrick constantly denies it being his wallet. Man Ray's attempts to convince Patrick to take it result only in anger and he nearly attacks Patrick for his idiocy, causing another use of the tickle belt.

The second lesson, involving helping someone carry a heavy object, does not go any better. Man Ray tries to help Patrick with his heavy box, but Patrick continually drops it onto Man Ray's feet. Fed up, Man Ray angrily asks Patrick what is inside, which turns out to be more wallets. Man Ray takes his rage out on Patrick, so SpongeBob tickles him yet again, but this only drives Man Ray to slam Patrick harder for his stupidity.

SpongeBob's third lesson is hijacked by an injured Patrick, who gives Man Ray a random question as an excuse to tickle him further and get revenge. SpongeBob tries to take back the button, and as they fight over it, they accidentally break it. The belt's tickling increases exponentially, giving Man Ray no choice but to genuinely plead to be released. SpongeBob and Patrick happily do so, thinking Man Ray has now been rehabilitated. After catching his breath, however, Man Ray steals a power glove, zaps the two, and runs away.

After realizing Man Ray is still evil, SpongeBob and Patrick don their Mermaid Man and Barnacle Boy costumes and use the invisible boatmobile to catch up with Man Ray. They try to use the Orb of Confusion against him, but wind up becoming confused themselves. With nothing left in his way, Man Ray attempts to rob a bank. To his bewilderment, he finds the feeling of being tickled has not left him despite the belt being removed and, having legitimately lost the motivation to antagonize others, decides instead to merely open a checking account.

Man Ray then turns off the Orb of Confusion and tells SpongeBob that the lessons have indeed changed him for the better. He presents his helmet to them and takes his leave. SpongeBob is overjoyed that they saved the day like their heroes, but Patrick remains in a dazed stupor, even with the Orb turned off and SpongeBob tries to get him to snap out of it, as the episode ends. 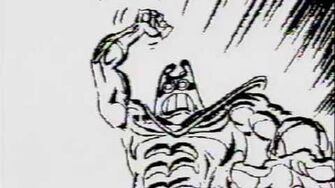