Start a Wiki
watch 02:22
Who is Mermaid Man?
Do you like this video?
Character
Gallery
Appearances 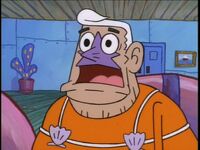 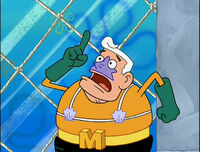 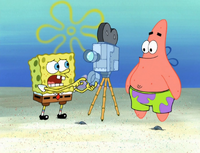 Mermaid Man is a semi-retired superhero living in Bikini Bottom. He and his sidekick, Barnacle Boy, are the stars of a show-within-a-show called The Adventures of Mermaid Man and Barnacle Boy, but they are also real superheroes within the universe of SpongeBob SquarePants.

The two are now very old and currently reside at Shady Shoals Rest Home. However, their two biggest fans, SpongeBob SquarePants and Patrick Star, convinced them to come out of retirement.

Mermaid Man is a parody of both Aquaman and Batman. He wears a nearly identical costume, (Two shells on each side) and his powers, which include being able to control the creatures of the sea, are also similar those of Aquaman. Mermaid Man and Barnacle Boy's TV show and method of fighting crime are based on the campy 60's Batman TV show, their secret headquarters, the Mermalair, is a parody of the Batcave, and their vehicle, the "Invisible Boat-Mobile" is a parody of both the Batmobile and Wonder Woman's invisible jet. Of note, he and Barnacle Boy are virtually completely human in appearance, save they are the same size as the other characters of SpongeBob SquarePants.

Though it is Unknown how they breathe underwater, Mermaid Man as well as Barnacle Boy are both humans, and it has been confirmed that they once lived on land. Mermaid Man has a circular body and thin legs. His costume is very similar to that of Aquaman having an orange shirt, green pants, and seashells on his nipples. He also wears pink slippers due to his age. He also wears a purple starfish on his nose, and has a purple belt with an "M" on it that has the ability to shrink people.

SpongeBob wants Mermaid Man & Barnacle Boy to sign a photograph for Patrick's Birthday. However they want to get rid of SpongeBob and sent him on random tasks around Bikini Bottom.

Mermaid Man & Barnacle Boy appear in the Mermalair but Plankton's Robots have invaded it.

He can also be seen in the levels Jellyfish Fields and Kelp Forest.

SpongeBob acquires Mermaid Man's powers and has to defeat all his enemies.

Mermaid Man is an old man who is overweight and very round in shape. He exhibits several typical characteristics of an old man, such as white hair, poor sight and hearing, crankiness and memory loss, often forgetting what he is thinking about or doing. Elements of his costume not shared by Aquaman include an M-shaped belt buckle (several versions of Aquaman, however, wears an A-shaped belt buckle), a purple star-shaped mask, a scallop-shell bra (which is also a cell phone), and a pair of pink fuzzy slippers. The purple-shaped star over his nose was given to Mermaid Man by mermaid. It is the only way that he can breathe underwater. Mermaid Man has a sidekick, Barnacle Boy, who he still treats like a child even though Barnacle Boy is 68 years old (according to "Mermaid Man and Barnacle Boy V"). Mermaid Man also notably goes crazy whenever anyone says "evil".

According to Mermaid Man, his powers all come from his costume. His abilities include summoning and controlling sea creatures, high speed swimming (used to create the "Raging Whirlpool"), water balls, Super Strength and the ability to survive underwater. While Mermaid Man retains all of these abilities, they are not as powerful as they were in his prime.

In addition to this, his belt features a wide array of abilities, similar to Batman's utility belt, as seen in "Mermaid Man and Barnacle Boy IV". These abilities are usually manifested as a beam or ray. The only one specifically named on the show is the "Small Ray", which shrinks things, but various effects were created when SpongeBob tested various buttons on Squidward in an attempt to reverse the Small Ray's effects. These include several bizarre mutations and effects, such as causing the victim to suddenly catch on fire, turn inside out, get a clump of snakes covering their head, or to be cut in half by scissors. Also contains the power of Wumbo. Wumbology is the study of everything wumbo. Wumbo means the "opposite of mini" as seen on the show. Also, in the game "Spongebob Squarepants: Lights, Camera, Pants! ", Mermaid Man states that his belt has a 'Chin Cam', a hidden camera that takes pictures of his chin.

Merchandise based on him

Similarities to DC and Marvel Superheroes