She has been an actress since the 1960s, starring in the 1964 Broadway musical Hello, Dolly! and television shows like Diff'rent Strokes, M*A*S*H, and General Hospital.

In 2001, Catlett was nominated for an Annie Award for her voice-over work as Mrs. Puff, placing in the category "Best Voice Acting by a Female Performer in an Animated Production."[1] Tom Kenny (voice of the title character) was also nominated in the same year, making them the first two SpongeBob cast members to be nominated for an award.

As of 2018, being a voice actor on SpongeBob SquarePants and Kamp Koral: SpongeBob's Under Years are Catlett's only regular television roles; Catlett described herself as "basically retired" in 2013, since she is good friends with the other SpongeBob cast members, making the SpongeBob recording booth an easy environment that requires less preparation than in-person performances.[2]

For the first seven seasons, Mary Jo Catlett exclusively voiced Mrs. Puff. Staring in season 8, she has voiced some other characters, such as Grandma Tentacles and some background fish. 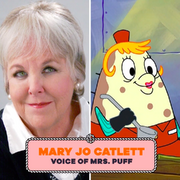 Retrieved from "https://spongebob.fandom.com/wiki/Mary_Jo_Catlett?oldid=3498147"
Community content is available under CC-BY-SA unless otherwise noted.