"Mall Girl Pearl"
"Married to Money" is a SpongeBob SquarePants episode from Season 9. In this episode, after following Plankton's advice, Mr. Krabs decides to marry the only thing he ever loved - money.

In the beginning of the episode, Plankton has another attempt to steal the Krabby Patty secret formula using sea bears, but SpongeBob stops him by tickling the sea bears and covering himself with Jellyfish Honey, which sea bears crave. Then Plankton and Mr. Krabs argue, and after Mr. Krabs says that he likes money a lot, Plankton says, "If you love money so much, why don’t you marry it?" Mr. Krabs says that it's not such a bad idea, giving Plankton an idea.

That night, Mr. Krabs takes out the trash from the Krusty Krab and hears someone crying. He spots a small lady made out of dollar bills on a nearby bench and is easily smitten. Mr. Krabs asks why she was crying and she says that her date was supposed to take her to the bank but stood her up. The lady introduces herself as Cashina, and Mr. Krabs asks if he could take her out to dinner. Cashina says that she would love to. Unknown to Mr. Krabs, however, Cashina is actually a robot piloted by Plankton who intends to scam Mr. Krabs into giving him the secret formula.

While eating spaghetti at Fancy!, Cashina asks Mr. Krabs if he knows any secrets or formulas. Mr. Krabs mentions that he knows one... but for delicious kisses. He then proceeds to kiss Cashina, but Plankton quickly presses a button that replaces her lips with ones that electrocute him on contact. Nevertheless, he took the kiss well.

At Mr. Krabs' house, Pearl finds out about his relationship with Cashina and disapproves it, claiming that she doesn't want a stepmother like the ones she saw in the movies because then she won't get her "Prince Charming." In an attempt to change her mind, Mr. Krabs introduces Pearl to Cashina. However, Pearl immediately doesn't like her and storms off to her bedroom. Mr. Krabs wants to talk to Pearl, but Cashina says that she will do it alone. She successfully manages to get Pearl to like her, talking about girl stuff. Witnessing this, Mr. Krabs decides to propose to Cashina, bringing Plankton one step closer to finding out the formula.

The next day, SpongeBob, Patrick and Squidward set up wedding decorations all over the Krusty Krab. As the wedding between Mr. Krabs and Cashina takes place, the two exchange vows and then kiss, causing Mr. Krabs to be electrocuted again. Thus, Mr. Krabs and Cashina are officially married. SpongeBob then provides Cashina a bouquet of flowers to toss towards a group of ladies attending the wedding, but Patrick catches and swallows the whole bouquet. At the reception, SpongeBob wonders where Plankton was the whole time as Mr. Krabs dances with Cashina and swings her around, causing Plankton to become dizzy and throwing up.

Mr. Krabs and Cashina go to Honeymoon Hotel where he proceeds to kiss her again, only to be stopped. Cashina asks Mr. Krabs to tell her the secret formula and he says that he will. However, just as Mr. Krabs is about to tell her the formula, he starts sweating nervously and his eyes get watery. A teardrop falls on Cashina, causing her to malfunction and explode, revealing Plankton inside it. Mr. Krabs, shocked at the revelation, starts to get angry, but then gets depressed. He says that he's been alone for so long and that it was the first time that he fell for someone, and that although Cashina wasn't real, his feelings were. Plankton just concludes that he was being crazy and runs out of the room, declaring that he will get the formula one day. Mr. Krabs breaks down sobbing, and a bellhop tries to console him, only to say that he has to tip him. Mr. Krabs then stashes away the money from when Cashina exploded and gives the bellhop a nickel and when he caught it the nickel landed in a bowl of pea soup, as the episode ends.

Vincent Waller confirmed this episode on Twitter on September 1, 2015.[2] It was confirmed that this episode would premiere after the episodes "Mall Girl Pearl" and "Two Thumbs Down" in airing order.[3]

It was also planned that Mr. Krabs would be marrying a bag of money.[4] However, this idea was later changed to a stack of cash known as Cashina for unknown reasons, possibly because it makes more sense for it to be a stack of cash. 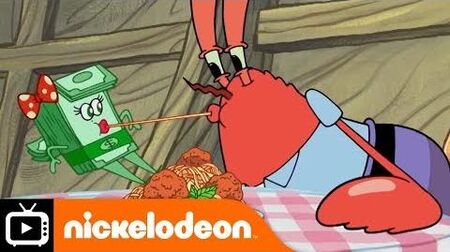