Manliness points are collectible items that appear in the console versions of The SpongeBob SquarePants Movie video game.

They are collectible weights that vary in size and color. The bigger the weight, the more manliness points the player receives.

Manliness points are scattered throughout the various levels, most often in plain sight. They can also be obtained by smashing open boxes or defeating enemies. Manliness points are used to fill a meter, and when the meter is filled, the player earns an upgrade point, which they can use to upgrade one of SpongeBob or Patrick's abilities: their health, spin attack, and the three abilities they unlock in the game.

If the player smashes many boxes or defeats many enemies within a short period of time, they will earn a multi-smash bonus, and they will be awarded with extra manliness points while a phrase like "combo" appears under the manliness point meter. 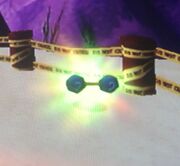 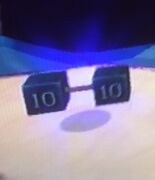 Pink manliness point
Add a photo to this gallery
Retrieved from "https://spongebob.fandom.com/wiki/Manliness_points?oldid=2990063"
Community content is available under CC-BY-SA unless otherwise noted.