"Two Thumbs Down"
"Mall Girl Pearl" is a SpongeBob SquarePants episode from season 9. In this episode, Pearl gets a job to be cool like her friends, but the only store that is hiring is the lamest store in the mall.

Pearl looks at the picture of Boys Who Cry. Later, she goes downstairs where Mr. Krabs is. Mr. Krabs thinks that Pearl is going to ask for money, so he locks his wallet and swallows it. Pearl tells him that she'll get a job at the mall. Excited to hear this, Mr. Krabs starts bouncing on the walls and roof of his home. He says that instead of her using his money for clothes and school supplies, she could use her job money. However, Pearl asks for ten dollars, so Mr. Krabs gets his wallet out of his mouth, unlocks it and gives ten dollars to Pearl.

Meanwhile, at the mall, Pearl goes to Hotdog on a String for a job. Marina tells her boss, Mr. Pepalino, that Pearl wants a job. Marina takes Pearl to the boss's room. Pearl tries to get in, but due to her size, she can’t fit in. She eventually tries to get in backwards. However, Mr. Pepalino, who was at the doorway, is laying uncomfortably on Pearl's back. Being very small, he is flung onto the hot dog grill and burned, rejecting Pearl. Pearl then goes to Scorched Coral, where she asks Nocturna for a job. She said that her business was hiring but already hired an employee. Seeing that it is a goth whale who looks almost exactly like her and is very angry at the idea that she would be replaced by her, a frightened Pearl decides to leave. Afterward, she goes to Bangles and Dangles, where she asks Nixie for a job. Nixie introduces Pearl to the manager, who says that she isn’t hiring Pearl as "the only thing they don't dangle there is hope."

Meanwhile, Pearl is sitting on the bench eating a hot dog from Hotdog on a String. She laments that if she doesn't get a job, she'll have to hang out with her dad. An old woman named Beatrice shows up and takes Pearl to her store. They go down the escalator and go to a bad part of the mall that is filled with bad stores that are broken and covered with graffiti as well as criminals. Pearl asks what a horrible smell is. Beatrice tells her that it's one of the many perfumes she sells at Grandma's Apron. When they get inside Beatrice hires Pearl as her previous employee is "no longer with them" (she’s revealed to be alive and well, but simply not working there anymore). Meanwhile, Marina, Nocturna and Nixie are sitting at a table, waiting for Pearl. Nocturna asks if Pearl got a job. Pearl tells them that she works at Grandma's Apron. Marina laughs and asks if she's really serious as Nocturna says that the store is for old people. Nixie remarks that old people are "so old." They all start laughing at her, much to her dismay.

Meanwhile, while working at Grandma's Apron, Pearl's friends show up. Surprised that she’s actually working there, they start laughing at her again before leaving, causing Pearl to cry. Beatrice tells her that it's nothing to be ashamed of. She shows her a book of pictures from when she was in school. Beatrice tells Pearl that when she was young, everyone in school teased her and called her "Boring Beatrice." She then teaches Pearl how to be a grandma. They are then shown knitting, baking cookies and riding scooters. After that, Pearl's friends come back to Grandma's Apron. Marina sees Pearl's shoes and makes fun of them. Beatrice tells her to stop. However, Marina tries to use her hot dogs on strings to attack. Beatrice knits a scarf and ties the trio together. She then tells them about the time when she saw the first picture show. After that, Pearl's friends apologize to her. Beatrice tells her that even though being a grandma is fun, it's best to live young. Pearl then hangs out with her friends, after which Beatrice's arm snaps off and SpongeBob picks it up, as the episode ends.

Vincent Waller confirmed the episode on Twitter on September 9, 2015.[2]

The character designs and storyboards for this episode are from John Trabbic, Vincent Waller, and Sherm Cohen respectively. 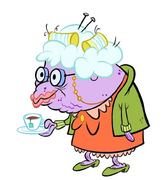 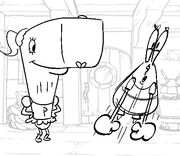