Encyclopedia SpongeBobia
Register
Don't have an account?
Sign In
Advertisement
in: Articles in need of better images, Books

1999 – 2016
The Main Model Pack is a book used by the SpongeBob SquarePants production staff at Nickelodeon Animation Studio to keep the designs of the series' main characters consistent. It was created during the first season of SpongeBob SquarePants in 1999 and was updated through 2016.

Portions of the book have been shown or released in various books and DVD extras.

The book features sections for the main characters of the series, hence the name. Each character's section includes multiple pages of construction drawings, ranging from finalized model sheets to rough sketches. There are notes below each drawing, detailing how the characters' individual features are meant to be drawn.[1]

The book originally featured eight character models, in order: Sandy in her bathing suit, Sandy in her diving suit, SpongeBob, Patrick, Squidward, Mr. Krabs, Mrs. Puff, and Pearl.[2] A page containing a full lineup of the characters' model sheets was marked "8/8."[2] Two colored versions of the lineup were made: one for daytime color palettes, and another for their nighttime colors.

After season 2, Gary was promoted to the main cast and added to the pack.[1].

In the credits of The SpongeBob SquarePants Movie, Plankton and Karen were promoted to main characters as well, bringing the total to ten main characters. Plankton was added to the model pack, while Karen was added to the "BG Layout Stock Pack." This is a companion book that includes layouts for objects, props, and locations. Karen's model is labeled "Prop" rather than a character model, since she is a computer.[1] Other objects in the layout pack include the Krabby Patty and the employee hat.

Model sheets for incidentals and non-main characters are not in the book or in the BG Layout Stock Pack. They are located as individual Photoshop files on the in-house servers for Nickelodeon Animation Studio.[3] 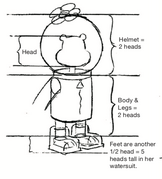